Rachel Richey’s new collection of Johnny Canuck pages from the 28 issues of Bell Feature’s Dime Comics is a welcome addition to the bookshelf of any Canadian comic book collector and the libraries of anybody interested in Canadiana or Canadian culture in general. I also hope that it will find its way into school libraries across the country. I cannot applaud enough the efforts of Rachel and Hope Nicholson in bringing many of those over-seventy-year-old pages of our own war-time comics back into the public fold and back into the general public consciousness. Together they produced the first book of this kind in the reprint of Adrian Dingle’s Nelvana stories from Triumph Comics last year and then went for separate efforts with Hope putting together the compilation of Brok Windsor pages from Maple Leaf Publications’ Better Comics and now Rachel assembling this collection of Leo Bachle’s creation, World War II’s Johnny Canuck.

Johnny Canuck has been a term used in our culture to personify the essential Canadian character and spirit much in the same way that England’s John Bull and America’s Uncle Sam represent the ethos of each of those nations. Unlike Jon Stables, the creator of Brok Windsor, who was in his early thirties and had been trained and already employed as a professional artist, Leo Bachle was only eighteen, with no real training in art, and learning the craft as he went in the pages of Dime and Active Comics–you can see the progression in body proportioning and smoothness of line as he went. The early Bachle art on Johnny Canuck is reminiscent of crude fanzine art of the sixties, but in order to fill out the ranks after losing a number of artists to military service Cy Bell was compelled to hire a number of artists who were still in high school and learning their craft as they went such as Jack Tremblay, Jerry Lazare, Al Cooper, Ed Alton, and Ed Shecter which may have contributed to the general reputation for weak art standards in those Canadian war-time comics.

The almost 200 pages of Bachle art, then four stories by André Kulbach and a final story from the last issue of Dime Comics No. 28 by mysterious Paul Dak are sandwiched between a sober forward by Seth and a solid, appropriately hyperbolic bio account of Leo Bachle / Les Barker by his late-life friend and Canadian war-time comics fan and expert Robert Pincombe. These contrasting bookends to the Johnny Canuck stories represent the common oscillation between the view that Johnny was a relatively minor figure in the Canadian war-time comic pantheon (Seth) and that he was an internationally renowned icon of the Canadian war-time effort (Robert Pincombe). My own stance is closer to Seth’s than Robert’s but Robert’s account really captures what Leo Bachle / Les Barker was about and how, as the creator of Johnny Canuck, he saw that creation slotting into the heads of kids who read those comics during the war and how we’ve come to make the character a comic icon of our own.

From Robert’s account Leo’s life was lived with panache and belief in himself from start to finish. Soon after Canada entered the war, when Leo was almost 16, he and a friend managed to sneak into the forces before they were found out after a few months. I’ve often wondered why he didn’t enlist again when he actually turned 18 in late 1941 but chose instead to start working for Bell Features. Bachle structured his stories around his mysterious Canadian rogue operator whose fists cut through the Axis right to the chin of Der Fuhrer himself. André Kulbach pits Johnny against post war Japanese enclaves who are still striving for power and Paul Dak sends off the series with story a parody of itself. It takes on the trope of Hitler still being alive somewhere after the war but in this story he is called Rudolph Hindor and has fangs and is saluted with the phrases “Hi-de-hi” and “Ho-de-ho.” Not the most noble of ways for one of Canada’s icons to exit the stage. Bachle himself appears to have signed away the rights to the character in late 1944.

After leaving comics, Leo Bachle changed his name to Les Barker and began a career as an entertainer often using his drawing ability in his act.

Seth notes that it’s more likely that Johnny Canuck was not as wide-spread and popular an icon that Leo Bachle would lead us to believe. He notes that J. C. was never the main feature character on any of the covers of Dime Comics and Cy Bell and Adrian Dingle must have put the most popular characters of the time on the covers of their comics in order to sell them (on the other hand, one of Bachle’s other creations, The Brain, received a half-a-dozen cover features in Active Comics –see my earlier column on feature cover appearances in Bell comics).

Johnny Canuck’s stories were always in the second half of the book while Rex Baxter led off every issue of Dime Comics. When Cy Bell released a set of six 15 cent compendium comics in 1945 bringing together stories in each issue of some of Bell’s most popular characters, Johnny was not included, though Nelvana, Speed Savage, and The Phantom Rider were. Even when Cy Bell put out a title of reprinted American stories called Johnny Canuck Comics, he chose a Nels Grant cover from Triumph Comics No. 27 as the featured image.

But then why do we remember Johnny now, ahead of more popular characters of the day such as Freelance, Rex Baxter, and Speed Savage? To my mind the stage was set for raising up a pedestrian, perhaps even somewhat obscure wartime comic character to a culturally iconic status by the common angst for a Canadian cultural identity that we began to experience in the sixties and the momentum towards resolving that angst with the adoption of our own Canadian flag in 1965; the centennial year and Expo ’67 a couple of years later; the rise of our Canadian recording stars such as Gordon Lightfoot, Leonard Cohen, Joni Mitchel, Neil Young and the Guess Who in the late sixties; the Summit Series with the Russians in ’72. Just prior to that series, in late 1971, Patrick Loubert and Michael Hirsh gathered together some of the Bell Features material they had just purchased and put out The Great Canadian Comic Books containing a number of reprinted Johnny Canuck pages. This perked up the ears of our grasping out for Canadian cultural identity, at least for us who were comic fans and were brought up on the Marvel sixties revolution.

What I really think jumped Leo’s Johnny as a plausible Canadian icon happened a couple of years later when Ken Gass wrote and directed and opened the play, “Hurray for Johnny Canuck”—you can still find the play in high school drama compendiums and occasionally performed again around the country. Ken Gass extracted Johnny from the Second World War Canadian universe and put him front stage centre. A year later we had Captain Canuck.

I’ve talked a couple of times with Richard Comely about a connection between Johnny and the Captain, but Richard says that he was unaware of the Canadian war-time comics and of Johnny Canuck when he came up with the red-and-white Captain.

Look for Rachel Richey’s compilation of the Johnny Canuck stories and pick it up if you can (I think only about 1,000 copies were made). It does tell us a bit about ourselves when it is Johnny and Nelvana we remember the most from the war-time Canadian comics and it’s these two figures that we’ve chosen to elevate to iconic status in the end. I look forward to Rachel’s next project which appears to be a reprint collection of Fred Kelly’s Doc Stearne (Mr. Monster) adventures which showed up in the last year of Bell Features existence. There should be some quality material to work with there and also a direct connection to contemporary comic culture with Michael Gilbert’s revival of the Mr. Monster character.

Rachel Richey’s collection of Johnny Canuck’s adventures should occupy a proud spot in your Canadian related comic book library. I urge you to pick up a copy. The deflating irony of the volume is that it was printed and bound in China. 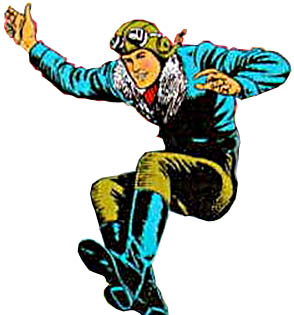