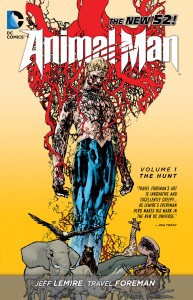 The launch of the New 52 sees the beginning of a brand new Animal Man series. Though this is the same character, Buddy Baker, who existed prior to the DC relaunch, writer Jeff Lemire (of Essex County fame) puts a different spin on this series by focusing less on super-heroics or meta-narrative and more on family drama and fantastical horror.

The first arc of this new series, “The Hunt,” finds Animal Man in a semi-retired state, having just starred in an independent film about a washed up superhero and become something of a counterculture icon (all this cleverly revealed via a fictional interview page from The Believer). Buddy is pulled back into duty, first simply by trying to help solve a hostage crisis in the children’s wing of a local hospital, but, when his powers start to develop strange side-effects and weirdness begins to occur around his family, Buddy finds himself and his loved ones at the center of a much bigger battle involving three primal forces of universe. 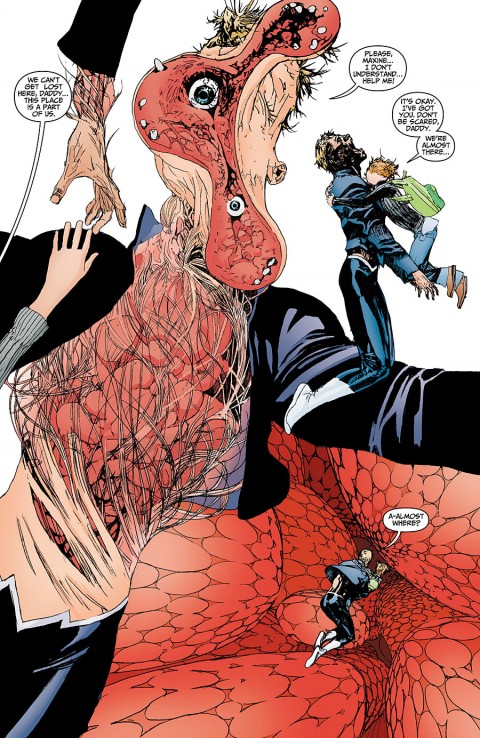 Lemire balances family dynamic with epic threats well, never losing focus on the Baker family even as Animal Man’s mythology continues to grow around them. By directly involving Buddy’s family – especially his daughter, Maxine – in the growing crisis at hand, Lemire elevates characters that would usually be considered “supporting cast” in your average superhero comic to co-star status, melding the “A plot” and the “B plot” into a singular horror-fantasy family drama. This gives the story a unique feel among other superhero series. Rather than being your standard superhero adventure, or even that of a super-family such as the Fantastic Four, Animal Man is a story about a super-family-man and the interesting family dynamics that entails. These dynamics aren’t explored in too much depth, due largely to the fact that the Bakers are reacting to a very sudden and unexpected threat without much time to react, but they are the core that much of the tension in “The Hunt” is built around. 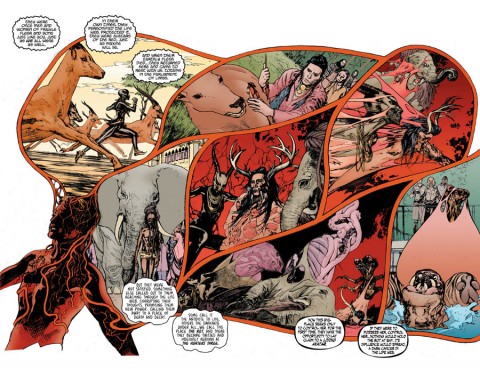 That’s only one half of what gives Animal Man such a unique presence next to so many other superhero tales. The other half is Travel Foreman’s absolutely brilliant art. Foreman uses a thin line to creates a very clean look and geometrically unusual layouts, as well as a keen use of negative space, to keep things interesting. As the book moves forward and horrors and monsters begin to appear, Foreman switches from clean, geometric lines and focuses on unwieldy curvatures and adding more detail to expertly invoke “The Other” in the villains who have come to throw the Baker family’s simple family life into chaos. These creatures seem grotesque amalgamations of insect and carrion and are stunningly disturbing to look at. A similarly disquieting technique is used during sequences where characters shift between realms and their whole bodies seem to turn inside out. Its surrealist horror in very affective form. 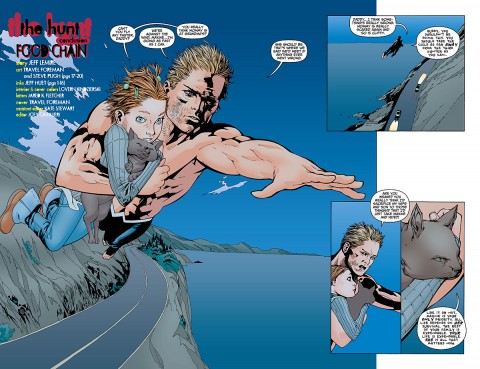 The last chapter of this volume actually gives readers a chance to “watch” some of Tights, the independent film that Buddy starred in. Drawn by guest artist John Paul Leon, the film is about a former hero who can’t seem to let go of his glory days and, as a result, has become estranged from his family, who have settled into a normal civilian life. It’s interesting enough that I wish it existed in real life, and serves as a slyly ironic reflection of the moment Buddy Baker finds himself in currently and a possible premonition of where his family may end up if they can’t hold it together. 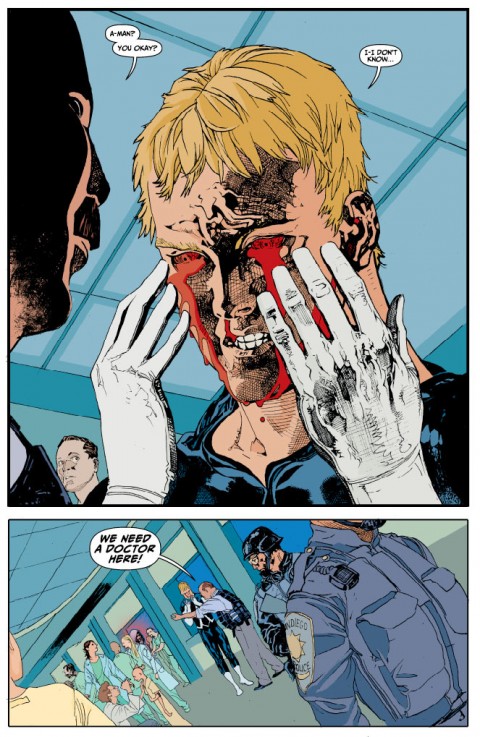 Lemire’s unique vision for Animal Man, combined with Foreman’s incomparable art, make The Hunt as fine a superhero story as you’re likely to find in the New 52. Between reintroducing Animal Man to a newly reborn universe that he’s largely been, at best, a bit player in for several years, as well as retconning the character’s mythos and building a new one on top of it – not to mention family drama and giant monster battles – there’s a lot going on in this volume. But with everything as beautifully drawn as it is, and the narrative keeping a solid pace throughout, readers will barely notice the occasional expositional excess. It’s a shame that Foreman, so integral a part in making Animal Man a standout book, will be replaced in the second volume (by Steve Pugh, who draws the last four pages of issues #5). The Hunt is a finely-crafted tale that readers shouldn’t hesitate to read.