I was recently (and very kindly) given a gift-voucher for a comic shop.  A perfect gift for a ‘comics guy’ since, it’s nice to pop along to the local comic shop with an (averaged sized) wedge of cash that you absolutely have to spend on comics…  no questions asked, I decided to use the voucher on something I’d been meaning to read for a while.  We all have a ‘to read list’ I’m sure – but on my list, there’re some pretty big event-books and titles that… maybe I should’ve read by now?!  The pick of my list on this occasion was Blackest Night – Geoff Johns and Ivan Reis whom (by the way) deserves a lot more critical acclaim than he receives, Reis’ art is almost flawless in the series and manages compliment Johns’ moody character beats on every page turn – every reveal.  The book is obviously fantastic – as anyone whom loves comics will know (since you’ve already read it).  The point of this post is not to review a book that most have read and loved already, but more… to acknowledge the books/series’ out there – that maybe we haven’t read and loved yet.

An interesting question is… What’s on your  ‘to read list’? – What should  you have read by now, but still haven’t? – and (interestingly) when a conversation kicks off amongst a herd-of-nerds in the local shop… do you pretend to know what the hell happened? Or do you ‘fess-up’ and reveal your incomplete knowledge of a crucial period in your favourite characters past?  Another interesting question is… What do you consider to be the books/series’ you absolutely must’ve read to qualify as a ‘comics guy’? and is your actual  ‘to read list’ different from your… ‘try and look cool list’? 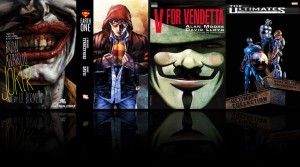 Aside from all that, I’d like to share a list of up-coming conventions in the UK this year, since the London Super Comic Convention was such a success, I’ll obviously try to report an as many as possible:-