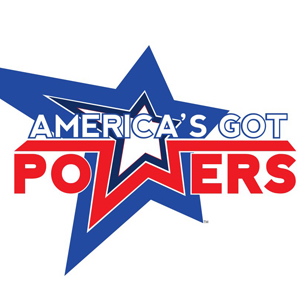 Last week I picked up the much hyped and strangely British America’s got Powers (IMAGE) by TV funny man Jonathan Ross and newly freelance Bryan Hitch, whom actually celebrated his birthday on Sunday.   I was lucky enough to pick up a signed copy since the pair recently visited London’s Forbidden Planet in a politely punchy PR plot to pull in the punters – though it seems, little if any PR was even necessary since issue 1 has now sold out completely at distributor level and is currently being reprinted to meet demand. Second printing will be on UK comic book shelves May 9th, with AMERICA’S GOT POWERS #2 following just one week later on May 16th. 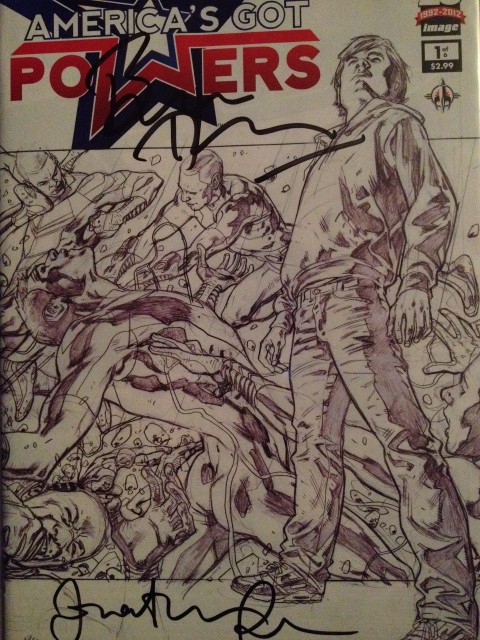 So, what’s all the fuss is about? Well, some of my all-time favourite stories were crafted by the pencils of Mr Hitch, namely (and among many others) The Ultimates with Mark Millar and Captain America Reborn 1-6 with Ed Brubaker – both, very obviously ‘Hitch’ from the inside out.  His fans are surely keen to see the project that tempted him away from Marvel – and equally to see just how far he can push his distinctive style in a freeing and blank, Jonathan Ross shaped, creator owned canvas.  ‘Creator owned’ is surely, a mouth-watering prospect for an artist as dynamic as Hitch given the previous editorial restrictions on the extremely commercial  characters at Marvel… “Please make Captain America’s head 11% smaller in panel 2”… cheers.    Meanwhile, UK TV Royalty and relatively new graphic writer:- Jonathan Ross is fresh off the back of his surprising success with Turf – and is restricted only by his imagination.  In Ross’s position, It would be tempting to make this new project one of vanity, instead it feels like someone told Ross to “write about what you know” – and so he did.  In any case, the ‘Fuss’ is oozing from the creators themselves.

AMERICA’S GOT POWERS is the story of “the most successful TV show on Earth”, a reality show of super-powered proportions.  A generation of super-powered teens struggle to prove their worth while the whole world watches – and with the scene set for the intriguing cross between Reality-TV and Superheroes in a Gladiator style showdown (like in Roman times… and dodgy, Saturday night TV from the 90’s),  the story kicks off with an explanation where the ‘powers’ came from exactly.  It appears, I giant and un-explained crystal struck the earth some years ago – as a result, all pregnant women inside a 5 mile radius inexplicably gave birth, irrespective of how pregnant they actually were, what’s more, every new-born inside the event-radius were not only healthy but, subject to a life with super powers!…  well, all but one anyway (obviously).  This opens the door on our ‘every man’ and offers a list of relatable scenarios.  Cut to Bobby Watts:-  in the ‘Strength Final’ 1 year ago, Bobby struggles to win the bout of strength – and collapses in a victorious heap on the field, his fate is suggested but not confirmed in a brisk intro… the TV/sport style commentary is without sympathy and sadly devalues the moment, intentionally or not.   There follows an even more brief characterisation of the rather sweet and deprived Tommy Watts (Brother of Bobby) whom appears to be the only living victim the ‘crystal event’ that wasn’t adorned with a superpower.  He’s familiarly feeble but, sweet and endearing (of course).  The stage is then set for the beginning of a the new season on reality TV show:- AMERICA’S GOT POWERS – and soon after our feeble, fanboy Tommy Watts has finished his shift in the souvenir shop he’s embarrassingly paraded in front of the fans as a mascot! (with his inevitable love interest by his side) – the show then begins and America’s top super talent is introduced by the presenters (Seacrest would be all over this) and begin their fight for actual survival on national TV.  In a slight political undertone, we learn that the show has been cancelled by the studio/government and the production’s scientific researcher is relieved of duty – a seemingly ‘good guy’ though, anyone in support of the show in the real world would be the bad guy…? the people stopping it would be our heroes… right?, an interesting switch and an obvious request for a connection to the character on Wossy’s part.  The transition from exciting, slick and highly anticipated and extremely trendy reality TV show – to a situation that’s spiralling relentlessly out of control moves a little too fast for my licking – and could’ve been paced out slightly longer with maybe, more believable reactions from the people involved?? and the live audience.  The speed at which the problem/changeover in the story is revealed is a little too quick – and could’ve been fleshed out with a lot more death and suspense, never mind.  Also,  the names of the ‘heroes’ from last season are quite cheesy (again, intentionally or not)  ‘quarterback’ for example is kind of… boring – and the costumes are a little old fashioned.  The whole opening story is a bit quick and hollow – and seems to be missing something?! I didn’t expect the main character (Tommy Watts) to be elevated to ‘hero status’ quite so soon either, when a problem in the arena is dealt with swiftly and surprisingly by the young ‘loser’, another moment that could’ve carried a lot more weight a little deeper into the story.  Tommy will obviously win the show and honour his brother somehow, in fact, I’ll be Interested to find out what actually happened to his brother, Bobby

Watts, did he survive the final battle from last season? no doubt, a flashback device will be employed to explain.  During this (almost) great little story (forgiving the annoying predictability and impatient speed), we’re dependant on Hitch’s beautiful and familiar art to help us along.  His trademark establishing shots and wide, architectural transitions are delivered wonderfully and almost effortlessly along with his glorious close-up faces.  His endearing weak spots are also evident though – the weird split legs?! that always seem to appear in Hitch’s art make a forgivable appearance and maybe even add a to the comforting familiarity in some way.  Love it.

While the story is very much set in a ‘real world’, I found some of the characters behaviour a little unreal and un… believable. There are some surprising reactions from the TV presenters and security staff when… a small child is thrown into the arena as the show takes a turn for the worse.  I’d like to’ve been tempted into fear a little more by this little event, I almost wish I’d been on the edge of my seat with a tight grasp of the couch but, it was revealed so quickly by the (rather jaded) presenters, it almost felt ‘ok’ that there was a child from the audience, whom had been torn from his seat, separated from his mother and thrown some distance to the arena floor… where the televised fight was continuing in spite of the obvious and hazardous problems occurring all around!  Again, it was all just a bit too quick and a little heavy handed for me. There’s also a typo that I noticed (I think anyway, unless Ross and the editors are simply smarter than I) and the language is fun but, kind of immature, I guess you could argue that it should be though in this case though.

Hitch:- “AMERICA’S GOT POWERS marks a huge turning point for me as my first creator owned series,” he went on – “The response has been overwhelming and there are so many other people to thank for helping to make the book such a success. I’m truly grateful to be telling the stories I’m passionate about and immensely proud that AGP has been greeted so warmly and so many have responded so kindly to Tommy and his fellow powered teens. Believe me, in this series and beyond, the best is still to come!”.

Don’t get me wrong, this is a pretty great book – and will no doubt have a lasting effect on fans.  It’s probably the most exciting book I’ve read in recent weeks in terms of its reputation and delivery.  I’ll be buying the next issue to continue on the journey which, I will probably enjoy in the hands of Ross and Hitch… I’d like to be surprised by the end though!!!! – not simply presented with a pile of predictions and clichés.  Hitch is almost a veteran, Ross however shows a promising spark of greatness but, at this point I’m happy to climb on board and watch him grow.