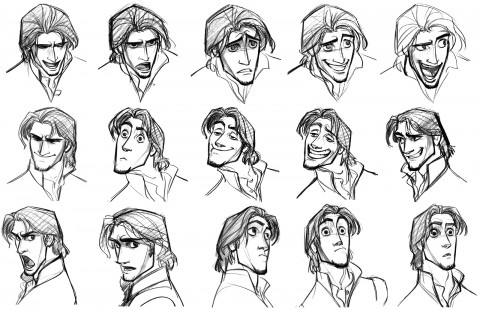 In the days and weeks and months and years and decades that we’ve all been fascinated and consumed by art and story in comic books, I’d like to wager my hard-earned pounds that, during your  time as a fan… you’ve probably attempted to create your own character in one way or another.

We all did that I think,  surely?

Typically, we scribbled our creations in the back of our school books and sometimes maybe even crafted an actual book using scrap paper and felt-tip pens which were always lovingly taped or stapled together in a scrappy mess and then proudly presented to our mothers to read and enjoy at their leisure… you’re welcome mum.

If you’re like me, you probably even attempted to build your own action figures out of clay or plasticine as a kid,  all in an attempt to create your own character and with the absolute assumption that the finished result would easily be as cool as Batman or Thundercats or Judge Dredd or Captain America or… whatever you thought was the coolest thing in the world at the time.   Easily.

Well for those of you whom continue to do this now… if (like me) you’re still drawing and seriously attempting to create your own characters as an ‘adult’ among the most talented and competitive artists in the world today, then I’ve discovered a bunch of key points during my own studies that I wanted to share here as a point of reference or debate or… whatever.

Do with them what you will.

Try to understand exactly why you like that particular character and why you don’t like others.  Of course you must research ‘how to create a character’ for yourself but, the real lesson-value will be found in the characters themselves, and how you think and feel about them.  Good, bad or indifferent.

If you really think carefully about it, that is. 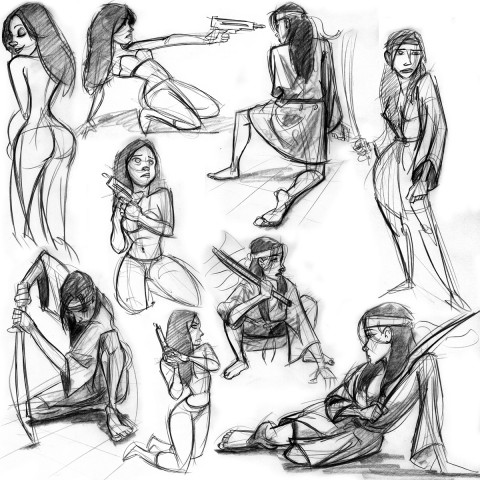 Where will the content live? On printed page? On screen? Or both?

You should know the possibilities and the limitations of both (and all) mediums where the character will appear.  You must play to the strengths as much as possible while being mindful of the weaknesses.  Lighting effects could look better on screen (for example).   Think about where the content will work best and design the characters accordingly.

This is all worth thinking about  in the conceptual phase of character design.  If it’s a ‘serious’ character, can it be simplified (visually) for younger readers or for animation?  and similarly, if it’s a flat/simple character designed for animation, what would a complex, one-off illustration look like for a comic book? 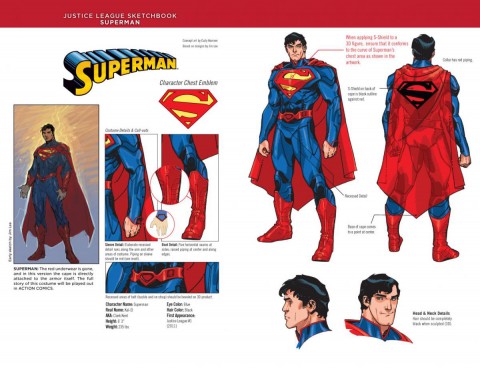 What will make a person want to know more about your character when they see it for the first time? What’s the hook? Has this character got horns on their elbows? Or are they made of water? Or are they dressed as a 1920’s gangster with a futuristic-looking weapon in one hand and a book about time travel in the other.  Why do I want to look at this?

It’s also worth thinking about the fine line between giving the character a visual hook and setting yourself up for unnecessary effort.   If the character has a full tattoo sleeve down one arm, do you really want to draw it 1000 times over and over?  Is it worth that?

Draw the character in a few different styles: scratchy and serious VS clean and cartoony.  Not only will this develop your skill-set but, it will also allow you to understand the characters’ best visual fit.  It will also give you an idea of what the character could potentially look like in the hands of other artists.

What’s the characters’ strength? Whether it’s swimming really fast or crime-scene problem solving, it’s your job to tell the story of that  strength in the visual somehow.  Bigger hands, cool glasses, protective armour etc.  Give the character a visual representation of the extreme characteristic that makes them who they are. 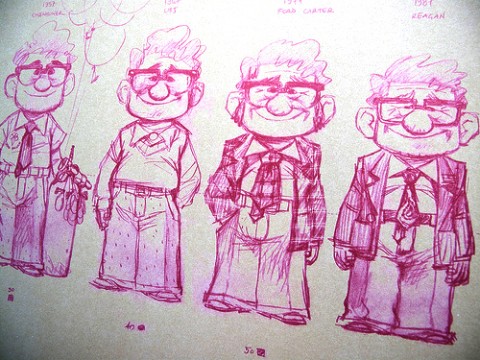 Just as characteristics can be sold in the visual, they can also be sold in the colouring.  Use intelligent colours to increase the value of the overall look.  Think about the colour-palette in terms of relevance, why should the scarf be orange?  What does that bring to the party?

Every shade of colour in the visual, should be questioned and scrutinised.

Give your character something to hold or fiddle with.  What one object personifies the main characteristics? An umbrella? A pipe?… A lollipop?   These small human things can help to ground the character on a familiar plane, even if the story takes place on a spaceship.

These types of material objects however, should also have a point, a purpose.  You should endeavour to tie these small quirks back into the story of the character in some way. 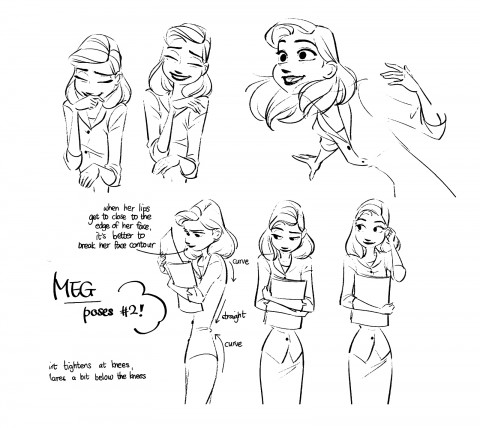 Design the front, back, top and bottom of your character in full.

You must know what that all looks like, and you must put together a solid contact-sheet with all these different views of the character including a good head shot.

A good contact-sheet is essential as a point of reference for when you start ‘shooting a scene’.  If you want an aerial or worms-eye view on the page, you’ll need to know what the character should look like from those angles and it should be consistent.

Whom is most like your character in real life or… that you’ve seen in a movie?  What’s their body language like in conversation? How do they stand? is their posture a result of a significant event in their back story? What do they do with their hands? How good (or bad) are their social skills?

Having evaluated real people/situations (or existing fictional ones), you should know the nuts-n-bolts of your characters personality and you should communicate that in every panel as best you can, and you must also exaggerate it.  Every character must act and react within their own personality in order to define it clearly. 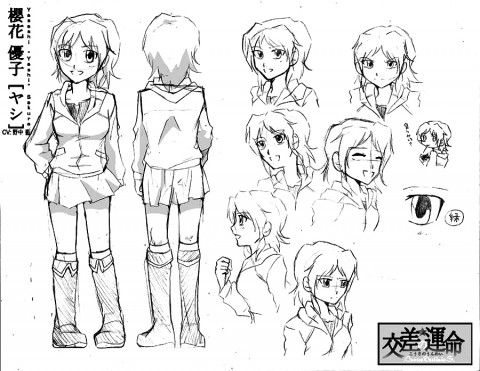 Emotions should also be explained in the characters visual, both in facial expressions and body language.

Either they’re hiding their true feelings deep inside, or they’re an open book of emotion that’s very obviously displayed overtly.  The exaggerated characteristics should be visible in every visual/panel.

What’s the point of all this?  Why is the character driven to act (and react) the way they do… and why do I care? What motivates them? What do they want, ultimately? Why do they want that?

You should know these things, even if it’s not part of the initial story.  Once you know what your character wants, they’ll start to tell YOU what to say in the dialog as you’re writing.

Backstory is key.  The character’s existence should be validated by… a reason.  How did they arrive at this point in their life?  Is the reason something to be celebrated? Or is it a source of fear? Have they come to terms with the past? Or do they need to manage their baggage every day?

You should know (roughly) what the characters’ life has been like up to now.  This will encourage a more natural-feeling character arc in most situations.

Think about the world they inhabit and the climate, what would they be wearing and why?  How would that look in 3 dimensions?  What’s the best version of the final look-and-feel for the environment setting? Can (and should) that be improved?

What would the character sound like? Do they have an accent? Do they speak English? Do they speak at all? if so, try and cast an actor to play them in your mind and hear that actors voice in your head as you write the dialog.

Do they represent a social or ethnic group? and is that important in any way?

Get feedback from people you don’t know and reach out to other creators.  Get them to pick holes in the design and then either fight for your idea… or fix it.

Once there’s a bunch of tangible characters to play with, a story can be planned and built around them or, applied too  them if the story exists already. 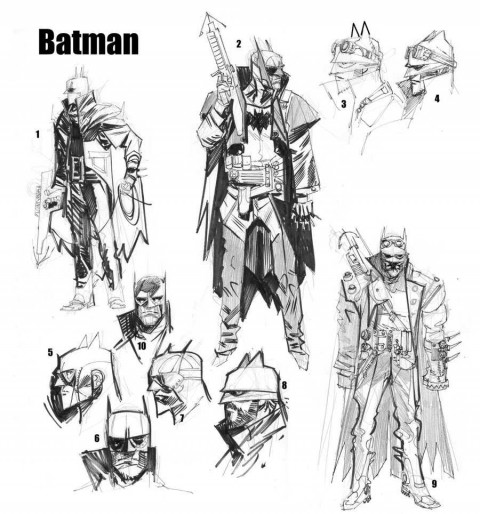 Building a story is whole other discussion.  Let me know if this is helpful at all?