So, I’ve decided to do a little fan-art JLA cover and document the progress here.

The idea for this ‘make-believe’ storyline is to suggest a catastrophe in NYC with the JLA discovering the discarded remains of the – currently missing – Avengers.

I think a cover like this should suggest a mixture of discovery and shock as the DC headliners try to understand exactly what happened… and what they might be up against while teasing the potential scale in a crossover story as huge as that.

In this first under-drawing, the composition is coming together but, as the empty space is slowly filled with the remaining characters and background, I’ll need to re-configure the shapes in order to make room for the necessary cover-information such as title, issue number, art team etc, all the time maintaining the simple rules of triangulation and strength… making a new composition. I’ll also need to scale everything to encourage an obvious depth of field.

Also right now, Supes looks a bit too Neanderthal and maybe Flash is a bit too thick, he should be a bit leaner as a master of speed. I do like the shared interest in Iron Man’s discarded mask between him and Bats though. Aquaman should be slightly out of the ‘click’ I think, Lantern should appear to not be bothered at all, but he must only appear so. WW should behave like a wild animal in terms of body language and behavior in my opinion and I’d like her to be deep in thought.

I’ll progress this for next time and share it again. 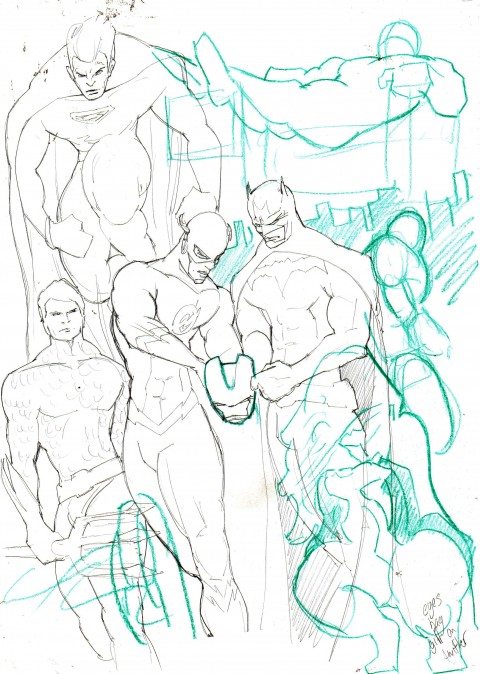