I was going about my business yesterday lunchtime in the most normal way with a trip to Tesco’s for a £2.50 meal deal: a ploughman’s sandwich, a packet of prawn cocktail crisps and a Kit Kat.  I then meandered over to Waterstones to peruse the grovels and generally loiter around the nerd section.  Standard behaviour.   All the time thinking about my own artwork and story etc, music in my ears, oblivious.  A leisurely stroll around St Pauls Cathedral followed to allow time to finish my lunch which I’m fully tucking into by this point, my mouth is full to bursting and I’m all wet and gross from the May Showers.  I suddenly notice a lot more police around than normal, some of whom were even armed with actual guns or on horse-back.  A few people had gathered by the main entrance and I found myself at the front of the growing crowed by the main steps with a rather confused look on my chops.  A car pulls up in front of me, a solid-looking, bullet-proof type wagon with some heavy duty security and a “do not come near me” vibe pouring off of it.  After a few short seconds in silence, out pops the actual Dalai Lama! One of the world’s most influential spiritual leaders and he’s looking at me.  He gave me a sort of, bow with his hands in a preying position, probably more aimed at the people behind me but, even so, I returned a raised and half eaten ploughman’s sandwich.  I charged my cheese and pickle to his holiness and nodded my head, to which he responded by swiftly disappearing up the main stairway, into St Pauls and out of sight.

The Dalai Lama is in London to give away over a million pounds to charity and probably won’t stay long.  I just thought this was a cool moment worth sharing.

The answer has to be yes.  He — and other people like him — must be aware of modern popular culture in the western world on some level, he probably has an opinion on the matter and it would no doubt be a decidedly enlightened one.  This got me thinking even more, how far do comics reach exactly? For example, when you say “household name” when referring to Spider-Man, Superman, Batman etc, does this imply that, only those with houses know who Spider-Man is? Or do we think that Spider-Man would also be mildly familiar to less privileged social groups in the third world? Would Spider-Man be familiar to people whom have only ever been exposed to western popular culture during a visit from a celebrity with a film crew?

If someone from an under privileged nation with no prior knowledge of comics was to visit a major city in the west today, how long would it be before they were forced to have an opinion about comic book characters? 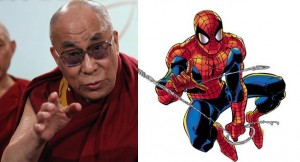 Kapow! ComicCon in London this weekend.  Sweet.
http://kapowcomicconvention.com/
A full and in-depth report will follow from across the Pond next week.