I return from my school-induced exile, returning to post before burying my head back in the books to revise a proposal, write a giant 20-page paper, and finish a take home exam. *le sigh* 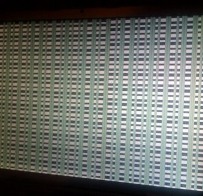 On top of it all, I lost an early draft of this and another article – this isn’t in and of itself the worst possible thing that could have happened had I not also lost the login information so I could post my finished articles as well – when my MacBook Pro succumbed to what is lovingly referred to as the Plaid Screen of DeathTM. It looks like my graphics processor needs to be replaced (which is a totally free repair even though my MacBook is out of warranty), but I will be without my beloved Mac for at least a week. I brought it out of sleep mode and this is what I saw. *le le sigh* At least it’s a little more stylish than the Blue Screen of DeathTM. ANYHOW, let’s move away from my lamentations of school work and my venerations of Apple products and let’s talk comics, shall we? 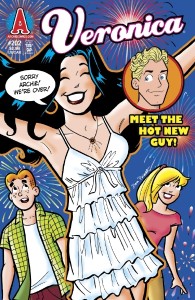 Last week, Archie Comics announced that it would be introducing Kevin Keller, a hot, hunky blond piece of manmeat who would be joining the series’ regular cast of characters in Veronica #202 (set to be released in September of this year). Now, in case you didn’t hear – and it certainly isn’t a spoiler – Kevin is a remarkable addition to the Riverdale High gang because Kevin is also gay (wacky hijinks are sure to ensue).

Gay characters are nothing new. Comics – both of the superhero and non-superhero variety – have seen them before, the most recent of which is the new Batwoman, Kate Kane. But they’ve never been in the Archie universe and that’s why this is such a landmark event.

I have to admit that, when I heard the news, I rolled my eyes, thinking that it was just tokenism. That it was just another half-assed attempt to pander to modern readers (part of Archie’s New Look initiative). To try to bump up sales like they did when they announced that Archie was finally going to choose between Betty and Veronica.

Despite my cynicism, I couldn’t just dismiss this announcement as a publicity stunt for two reasons: (1.) the fact that Archie comics’ target audience is kids and tweens and, (2.) the fact that when thinking of Archie Comics, I typically associate it with texts that seek to romanticize conservative fantasies about what the good ol’ days were like (you know, when the world was safe and wholesome and family-friendly) and nothing more than a fantasy of what high school should be like (replete with all reinforcing gender stereotypes and heteronormitivity) rather than what it actually is.

However, if Archie Comics’ co-CEO, John Goldwater says is true and that

The introduction of Kevin is just about keeping the world of Archie Comics current and inclusive…. Archie’s hometown of Riverdale has always been a safe world for everyone. It just makes sense to have an openly gay character in Archie comic books. 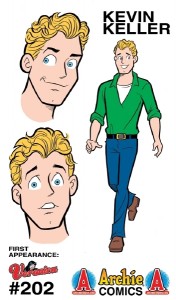 Then this actually indicates a progressive step forward. It’s exposing younger generation to the increasingly diverse set of people that they will meet in their own lives and, likely, in their own high schools. By increasing the visibility of more diverse characters, you normalize them. Integration challenges the view that heterosexuality is the norm and that anything that deviates from that norm is aberrant and dangerous.

But what about the children?, some ask over fears that exposing kids to a gay character will turn them gay (usually the same close-minded people who are opposed to sex education in schools because telling kids about sex will immediately cause kids to have sex). Other than the few choice words I have for them that aren’t fit to be posted in this article (usually questioning their intelligence, among other things), all I have to say is that the only danger in exposing kids to gay characters is that the kids will grow up to be more socially accepting people. One’s sexuality is not a choice so there is no danger of kids being turned gay. As Chip Alfred of Equity Forum (a GBLT organization), so astutely puts it:

Kids should be introduced to gay characters. If they aren’t, they don’t understand them and that breeds hatred and intolerance. Seeing a gay character pop up in their comic book might also help a kid who’s “13 and in Kentucky” be “out and proud.” 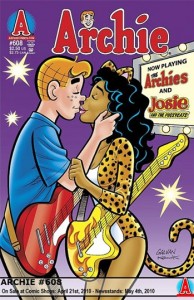 Now, all we can hope is that Kevin doesn’t become some tired gay stereotype, reduced to nothing more than his sexuality (the thing that makes him different), like most Riverdale characters are. And while it took sixty or so years to get the first interracial kiss on the cover of Archie #608 (Archie kisses Josie and the Pussycats’ Valerie Brown), I don’t see any same sex kisses – even if they’re as tame as this one – anytime soon.

So, on the one hand, props to Archie Comics for attempting to promote diversity and inclusion. On the other hand, I suspect that this groundbreaking character will be reduced to nothing more than a one-off character who occasionally makes an appearance to remind the readers just how progressive and diverse the series actually isn’t.

While I usually embrace my cynical (or is it simply realist?) side, this time I really hope that Archie Comics proves me wrong.

Shelley Smarz is a comic book scholar and MBA student. She occassionally takes to the streets to drink tea and knit at a local cafe with her little Pomeranian at her feet. She is terrified of a zombie apocalypse and thinks that Archie should choose Veronica, much to the chagrin of her boytoy.