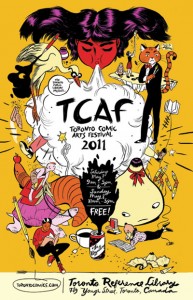 I’m happy to report that day two was a little less insane than the first, though, in the afternoon, it was still pretty packed. I managed to pick up a couple of books, get a commission, and chat with a couple of webcomic creators. The creators I met and chatted with were absolutely amazing.

But that wasn’t what made my day at TCAF interesting.

All in all, the day was great, save for two issues I had. The first was a conversation I had with a couple of other attendees who could best be described as pretentious, self-righteous snobs. You know the type; the ones who think that they’re superior to any other comic book reader because they only read indie books. The attendees I was talking to actually refused to call it comics, scoffed at me when I did, and said (in the haughtiest of haughty tones that) they preferred to use the term “sequential art” because it was too gauche to call it comics (I suppose they felt that this differentiated themselves from the sad, anti-intellectual plebeians who read anything other than the most obscure indie books).

On the one hand, I find asshats like this hilarious. They’re like those pseudo-intellectual hipster types (usually undergraduate university students) that you find in dark coffeehouses, drinking horrible coffee, and talking about Kierkegaard and Nietzsche (without actually understanding anything of either philosopher). However, they think because they name drop that people will think they’re dark, tortured intellectuals who no one else can understand.

On the other hand, this attitude absolutely infuriates me. It’s the same crap that I had to deal with when I was completing my MA – that what I was doing wasn’t a worthwhile contribution to cultural studies scholarship because my project was about (GASP!) superheroes and not about some obscure indie book. I quickly got tired of the elitist attitude in academia and so this whole experience just grated on my nerves.

To me, good comics are good comics. I’ve read some really amazing indie books. I also think that a lot of them are overhyped and, frankly, not that good (stylistically or otherwise). It’s the same with mainstream/superhero titles. Some are awesome. Others suck. There are some revered creators that I absolutely can’t stand – though I acknowledge and appreciate their contribution to the medium. To say that one is automatically superior to the other is the worst kind of cultural elitism.

Sadly, when speaking with a couple of other people who attended TCAF, this attitude wasn’t isolated to a couple of people. Apparently, quite a few people felt that indie comics were more “authentic” (whatever that means) and therefore superior.

Shelley Smarz is a comic book scholar and businesswoman. She’s sorry that this recap’s a little late but she’s been SWAMPED with work (some paid, some unpaid) for the last couple of days. Perhaps it’s time she invested in one of those mobile Internet devices so she can get what she needs to get done during her epic commute to her (paid) job from Monday through Friday.