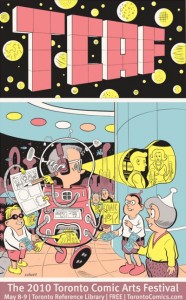 Reflections on Day One:

On the drive into the city today for the second day at the Toronto Comic Arts Festival (TCAF), I had a few moments to reflect about yesterday, what I did, and what the atmosphere of the event was. I was able to put these thoughts down on paper as I was exceptionally lucky to have someone driving me into Toronto from my current home north of the city. (Props to Jordan!)

The first thing I thought of this morning is, WHAT IS UP WITH THIS SNOW? It’s MAY! It wasn’t that I was surprised, per se. We always get a last skiff of snow sometime in April (though this year it I thought we had escaped that fate). However, my outrage was far more superficial than paying attention to weather patterns in the great province of Ontario. Rather, I had been expecting to be able to wear one of my cute little sundresses to the festival. Rather, I had to dig around the closet for my winter coat, realizing too late that I had prematurely packed it away for summer.

Now, since this ISN’T my personal blog, how about we talk some TCAF, eh?

The more I write for the website, the more I realize that cons are now different for me. And, don’t get me wrong, I’m not bemoaning the fact that I have to work at cons now. It’s kind of like when I was working the Big B booth at Fan Expo a couple of years back. The con experience is just different when you’re working behind the scenes (or, like now, when I’m covering the event). In both instances, you plan a little differently – you still have the freedom and time to have fun and do what you want to do, but you also have to keep in mind that, despite all that, you’re there to do a job.

It all comes down to what you’re paying attention to and what your overall purpose of the day is. Yesterday was spent networking with creators, lining up interviews, “taking in” the whole of the experience (more on that later), and going to a couple of panels that I thought looked interesting. I still got the chance to get some stuff signed, buy some books, and have a great lunch with Pete, David, and Scott.

Now, this is my first TCAF. It’s always been on my list of things to do during the summer but it kind of always fell by the wayside. And it’s very different from the cons I’ve been to. You have the opportunity to really interact with comic creators and it’s really groovy to just be able to talk with them one-on-one. Yesterday was a little hairy to do that (the venue was packed!), so I hope today that I’ll have more of an opportunity to do so. Though, don’t let the fact that it was packed deter you from talking with the creators. It’s not like you couldn’t possibly get through the throng of people to talk with someone. People could and were taking the opportunity to do so. I simply took more of a spectator approach as I knew that the last day of a con tends to be a little less hairy as a lot of people only attend the first day (which is also why we try to schedule all of our interviews on these days).

I was happy to see that the event was packed and that a lot of indie creators were getting the opportunity to get their stuff noticed. One of the things I picked up was David Bruins’ and Hilary Leung’s  The Legend of Ninja, Cowboy, Bear, which a kids’ book about three friends coming to realize that no one is better than anyone else and appreciating their differences. It’s an awesome read and I’d recommend it for kids of all ages. A sequel to the tale will be released this September.

I got to go to two panels yesterday – one that reflected on the production process of comic books (aligning it with that of an assembly line) and one on manga censorship. I’ve posted the first and am in the middle of editing down my notes of the second (I have to admit, bringing my wee little net book to the event really made keeping on top of everything a lot easier – especially since the library offers free wireless internet). I may post some reflections on them later but I haven’t decided if I have anything to add to what was already said. I posted them for informational purposes more than anything else

So, that was day one. I look forward to beginning day two.

The day was a little less busy and less crowded than the Saturday, but it was still jam packed. I missed a couple of panels I wanted to go to (so, sadly, no more panels are covered by me) because of I was doing an interview with Faith Erin Hicks and it took a little longer than I anticipated.

All in all, the day was insane. And time just flew by. We arrived right as the festival opened and then, the next thing we all knew, we were getting word that the festival was closing.

The venue itself – the Toronto Reference Library – is very interesting. It’s pretty awesome to have all the creators set up in such an environment. Usually cons are held at convention centres and it’s just big empty rooms filled with tables. The ambiance of being surrounded by all of those books while talking about books just reminds me of my old elementary school and the book fairs we used to have in the library. So, there’s this comforting nostalgia of it all that leaves me with a warm fuzzy feeling. I don’t even mind the crowds (as awesome as the venue is, even I have to admit that it’s a pretty small space to hold a con).

After interviewing Faith, I interviewed Danielle Corsetto, who does the web comic Girls with Slingshots. Both lovely ladies were such a pleasure to interview and ended up spending quite a bit of time talking with me.

All in all, it was an outstanding (if exhausting!) weekend.

From some of the stuff I picked up, I’d heartily recommend:

Shelley Smarz is a MBA student and a comic book scholar. She enjoys good books, good food, and good times. Her cellular phone’s charger slot has broken and she is without a phone for the first time in a very long time (she feels naked without it). Her friends suspect that she might be addicted to dairy products but doesn’t think she has a problem. Her favourite yoghourt flavour is vanilla. Currently playing on her iPod is a Blaxploitation music mix she bought when she was in Paris.