Is Rage of Ultron a chilling portent of the future?

I don’t know if you remember me, but I was your school librarian in grade school in Daytona Beach, Florida.  You were always such a delightful child, but  whenever I think of you…think of how bright you were..how much potential you exhibited… I always want to ask you the same question: Are you still reading Funny Books?

And at this moment, that absolutely terrifies me.

It terrifies me at this moment, because in the moment just before that moment, I closed the cover of “Avengers: Rage of Ultron”. 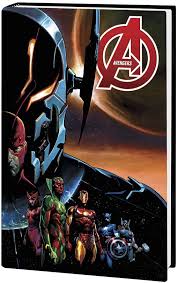 You see, Mrs. Wilkes, we don’t call them ‘funny’ books these days. That’s now seen as derogatory or diminutive. Besides, they aren’t all that funny any more. Of course you could make the argument that ‘comic’ is a synonym for ‘funny’, so ‘funny books’ and ‘comic books’ mean the same thing. But since we aren’t sitting on our asses in a crowded hallway outside the Dealer Rooms at Tri-Con, we don’t need to debate this any further…at least not at this time.

They are barely even ‘books’ anymore, to be perfectly honest, if they ever really were. More magazines than books, if you want to be persnickety about it. And now we appear to be headed towards a world where they won’t even be printed.  Digital comics seem to be the wave of the future. Are they better than actual tangible items you can hold in your hands and roll into a tube to stick in your back pocket? That, too, is another ‘asses/hallway/Tri-Con’ debate.

(By the way, Mrs. Wilkes, I would like to interject here, that I held great lust in my heart for you,  at least as much lust as a sixth-grader’s heart could hold. I honestly think that warm April day when you wore a mini-skirt while chaperoning our field trip to Cape Canaveral, was the day I took my first stumbling steps into puberty)

These days, those four-color publications you so charmingly refer to as ‘funny books’ are often called Graphic Novels. The Class known as ‘Graphic Novels’ falls into two basic Phyla: Collections and OGNs, which stands for Original Graphic Novels. There have been some amazing OGN’s — “Maus”, which earned Art Spiegelman a very deserved Pulitzer Prize; “A Contract With God” by the Zeus of the Comic Book Pantheon, Will Eisner; Sam Glanzman’s “A Sailor’s Story”.

But when it comes to DC & Marvel, it seems true, impactful OGN’s have been few and far between. “The Death of Captain Marvel” by Jim Starlin springs to mind and… well, that’s all that springs to mind, actually.

As a librarian, Mrs. Wilkes, you are probably wondering why I didn’t include “Watchmen” and “Batman: The Dark Knight Returns”. Technically, they were collections, not Original graphic novels.

So, it has been a long dry spell, in my opinion (and that is the only opinion I am qualified to share)  between the publication of “Death of Captain Marvel” and today at 2:15 pm when I opened the hardback cover of “Avengers: Rage of Ultron” by Rick Remender, Jerome Opena, Pepe Larraz and Mark Morales. 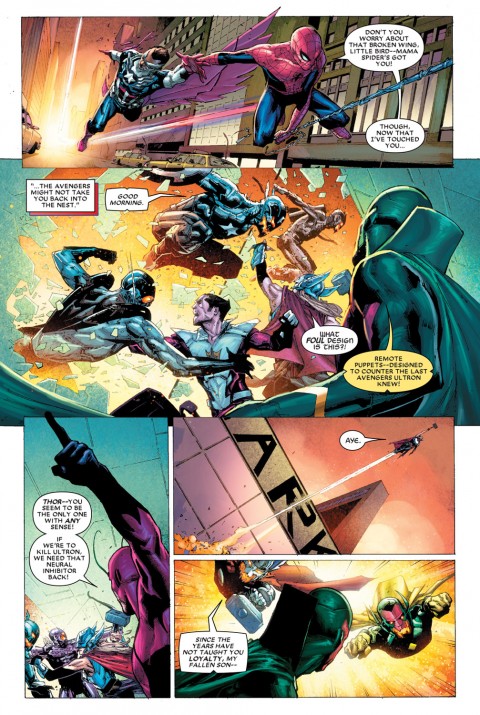 Beautiful to look at. Dialogue you find yourself reading out loud because you want to hear those cool words coming out of your own mouth. But here’s the big thing:

Most Original Graphic Novels have no impact whatsoever on the complex tapestry that is Comic Book Continuity.  They exist in a vacuum. Not so, A:ROU.  I always laugh at the ads in Preview Magazine that repeat the same phrase ad nauseum: “Things will never be the same”. Except, in this case, it’s absolutely true.

No, Mrs. Wilkes, I will not tell you what that ‘thing’ is! I am surprised you even ask. Suffice it to say, it makes changes. (Okay, one hint: It completes a cycle that Marvel started a while back)

You need to read this book, Mrs. Wilkes. I know, I know…you probably thought this was another pre-movie cash-in book foist upon the Merry Marvel Marching Society (Remember? I showed you my membership card? You were remarkably unimpressed). But this one is important. And that just doesn’t happen. Original Graphic Novels are almost always non-impactful.

And that’s what terrifies me. You  see, the price tag on “Avengers: Rage of Ultron” is $24.99. That is over six times more than the cover price of your average funny book/comic book!

There ain’t nuthin’ funny or comic about that.

Is Marvel giving us a look into the future? Is this the first precognitive whisper of the state of comics yet-to-be? A warning volley, fired over our spinner racks? Is the comic book, just like Ultron, evolving into this advanced entity?

I hope not, because Zeus help me, for a book as good and important as “Avengers: Rage of Ultron”, I would pay it!

The science of lenticulars, and Doc picks a 2019 Oscar