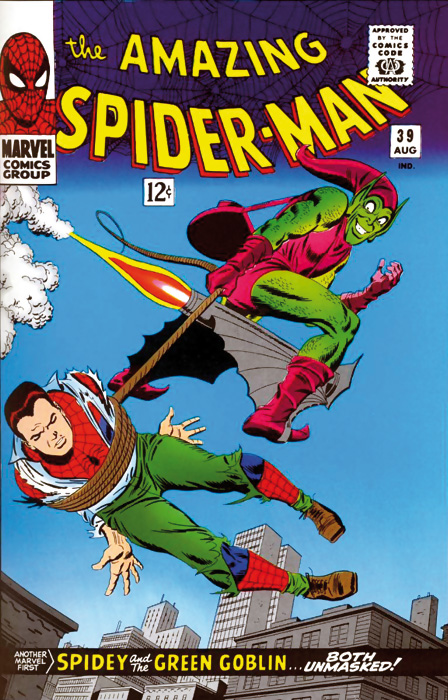 One of the benefits of enjoying a character that has been around for decades is that you have hundreds, if not thousands, of great stories to go back and read. The downside of this is that you have no way of truly enjoying the stories in the same way that the readers of the day did. For example, I knew that Norman Osborn was the Green Goblin long before I read Amazing Spider-Man #39 and #40. It is a great story (that is why I chose it for today’s column), but the impact of the big reveal at the end of issue #39 was lost on me. Instead, I’m able to view it as an important first, a museum piece, and learn how it all happened. Much of a character’s history is taken for granted when reading books today, so it is great to revisit key issues and see where it all began.

My favourite Spider-Man artist is John Romita Sr. and coincidently (or not) these issues mark the beginning of his work as regular penciller for the Amazing Spider-Man. Steve Ditko had left after finishing issue 38 and by some accounts the fight over the story for these issues were what broke the proverbial camel’s back.

The two-part story is an incredibly well-paced yarn showcasing why the Green Goblin is Spider-Man’s #1 villain and why their battles have always been so personal and brutal affairs. The Green Goblin has a plan to discover Spider-Man’s secret identity and does so with relative ease by arranging for a group of thugs to hit Spider-Man with a gas that knocks out his Spider-sense. The Goblin then follows Peter Parker to an alleyway and, subsequently, home to Aunt May’s house. The Goblin captures Peter on the front lawn and takes him back to his hideout where he reveals that he is none other than Norman Osborn, industrialist and father to Harry Osborn! The image of Spider-Man bound, unmasked, and being carried away by the Green Goblin also made the cover and I’m hard pressed to think of another Spidey cover (except for issue 50) that more perfectly captures the issue with a single image.

Parker is helpless, his secret identity revealed, and he has been defeated by the Green Goblin. I would have run for the newsstand to grab this if I was a kid back in 1966.

The cover for #40 I’ve always found too revealing. I love the colours, but it basically takes away any suspense about Spider-Man winning or not. The Green Goblin is defeated with his head bowed in subjugation and I haven’t even turned to page one yet. The issue is also the origin issue for the Green Goblin, and it nicely provides the reader with both the reason for Osborn’s powers (and ties it to Mendel Stromm) while recapping every previous defeat (issues 14, 17, 23, and 27).

As I mentioned above, I think that the pacing and variation in these two issues are perfect. The creative team moves back and forth from quiet moments to all out action effortlessly and many storytellers would benefit from how Lee and Romita let the story breathe by having more sombre and mundane moments peppered throughout the Goblin/Spidey knock-down drag-out slugfest.

These issues are a great example of the super-villain talking too much revealing his plans scene, and yet it somehow feels less silly and contrived than other examples of the time period (from the same writer no less).

I also enjoy how these issues create and play with what would become the recurring themes of Aunt May’s weak heart, Parker’s lack of filial responsibility to Aunt May, people being worried about Parker because he is sensitive, and Anna Watson thinking Peter isn’t responsible.

Finally issue 40 ends with Osborn being defeated and getting amnesia so Spidey’s secret identity is saved again. A major shake up is set back to status quo.

Follow up stories with the Green Goblin are way too numerous to mention here, but if you enjoyed these stories I would suggest you track down The Pulse issues #1-5. The Pulse was about Jessica Jones and reporters from the Daily Bugle. In this opening arc Jessica is investigating the death of a Bugle reporter at the hands of Norman Osborn. During a fight with Spider-Man and Luke Cage the Green Goblin’s true identity is revealed to the entire world and he is sent to jail for the first time in the character’s history. The Pulse #1 is around $5 and the other issues would set you back $3 each.