Obviously, things are going swimmingly for me right now. Sherlock, Star Trek, Oscar nominations, and let’s be honest here, I Smaug-ed the living daylights out of those Hobbit movies. And now I shall play the lead conjurer in the Marvel Motion Picture “Doctor Strange”.

As you Yanks like to say: I have it made in the shade.

Not so fast, my friend.

You’re a confident guy, Benny, but you need to listen to me. Remember the time when I said: “The mullet isn’t working, Ben, think about getting a perm.” And it was all backrubs and benoits after that.

While it is true that these days comic book-based movies are express trains to guaranteed success, it hasn’t always been that way. If you don’t believe me, ask John Haymes Newton, Danuta Rylko Soderman and Bill Nuckols. 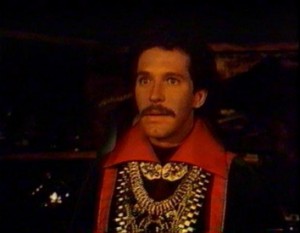 He was the first dude to look into the eerie Eye of Agamotto. 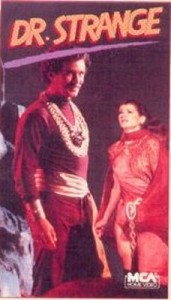 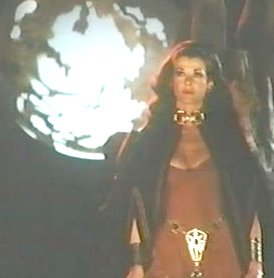 Nameless One: Why have you spared him?

Archer’s Mom: I am still a woman. And the man attracts me.

Nameless One: Then you find no satisfaction in my service?

Archer’s Mom: I would feel the warmth of a mans arms again… after all these years alone…

Hooten wasn’t bad eye candy either. Three years later he was in a torrid little flick called “Fantasies” where he dallied with Bo Derek, and that’s Dallied with a capital “D”. I’m sure it was fun to film, but apparently it wasn’t fun to sit through, because hardly anyone did.

He had a part in “Inglorious Bastards”, not to be confused with “Inglourious Basterds”, which had a much better director, and a much worse spellchecker, apparently.

And that was about it for the Hootster. Which is kind of a shame, because he was pretty good, and the movie was pretty good too. Remember, this was pre-Tim Burton “Batman”. This was before the era of “How can we capture the essence of this super hero character and translate it with love and energy on movie screens?”

This was the era of “They just made a big bucket of moolah on that Superman movie with Brando! Go spend a couple of hundred, get the rights to some funny book, we’ll put sexy actors and actresses in it and spend about $30 on special effects. We’ll be ROLLIN’ in it.”

Didn’t happen for these guys either– 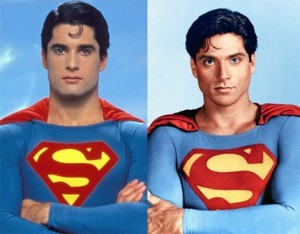 Another dynamic duo of John Haymes Newton and Gerard Christopher who worked a sort of time-share playing the Boy of Steel in “Superboy” from 1998-92. One with spitlock to the left, one to the right.

Twice, CBS tried spinning off characters from “The Incredible Hulk”. They figured the Hulk worked, why not some other comic book types. But the TV show Hulk was just “The Fugitive” with gamma radiation. I was there, I will tell you, the love for Lou Ferrigno and the actual acting talent of Bill Bixby is what made that show work. So when they spun off– 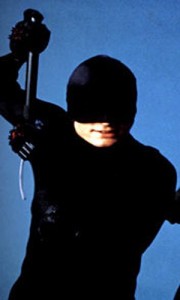 –Rex Smith as ninja-Daredevil…in “The Trial of the Incredible Hulk”.. 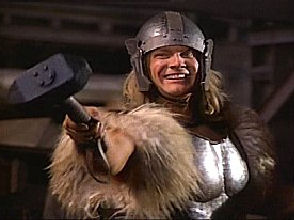 –And Erik Allan Kramer as trapper-Thor… in “The Incredible Hulk Returns”, the spin-offs never materialized. I thought Kramer was terrific. But we were still in the moolah/funny-book/$30 mindset. As in everything I have seen him in since, his acting was terrific and his humor sets him apart. This is a great dude. If anything happens to Sir Anthony Hopkins (Heaven forbid), Kramer deserves a shot as Odin. I think Smith devoted himself to a cabaret act, singing “You Take My Breath Away” to rapt audiences. 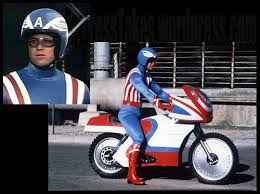 But our favorite star-spangled Avenger has been the real kiss of death. Red Brown played the old shield-slinger in 1979’s “Captain America” and “Captain America II”, because Roman numerals were how we rolled with sequels back in those days. Red looked the part, handled the physical stuff well, and had a pleasant demeanor. But again, it wasn’t Cap. It was star-spangled Evil Knievel. 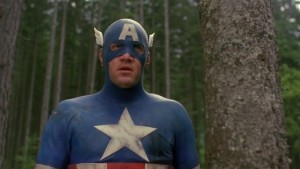 Do we want to talk about Matt Salinger in the 1990 movie “Captain America”? Let’s just say Matt probably never brings up the movie, and always introduces himself with: “Yeah, my dad wrote Catcher in the Rye. That’s it.”

My point, Cummerbund, is this: Your generation have grown up in a halcyon age when people who actually understand why comic books work, make comic book movies! Not all of them…Koff-Koff-Ghost Rider-Koff-Koff… but more do now. Stay vigilant. Stay on your toes. And by the Crimson Bands of Cyttorak, don’t let them put you in a love scene with Lucille Bluth.

P.S.- Danuta Rylko Soderman and Bill Nuckols played Black Canary and Hawkman, respectively in the fiasco “Legends of the Superheroes” which added a character named Retired Man to the Justice League. The Defense rests. Can you spot him in this pic, kids? 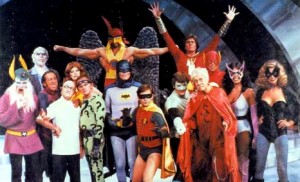