My family is moving next week so I’ve been packing up my comics “stuff” since I don’t let the kids touch it and my wife steers clear of my hobby. Box after box of hardcovers and trade paperbacks were carefully packed away and set aside for the movers. If was great to handle every book again and there were quite a few moments when I would stop and give a book a quick thumbing to relive the story.

What wasn’t so enjoyable was fitting all my comic character statues back in their styrofoam boxes. What a headache. Next came my collection of ad posters: since the 1980’s I’ve collected the small posters comic retailers get to show off a new title. They’re always free and have been a nice way to connect; that is until I realized how many I have. Finally my portfolio and original art went into boxes; I started collecting comic posters, moved to portfolios and then original art as my salary and available funds increased. Now that I’m married, have three children and a mortgage that has shrunk to pre paper route levels. 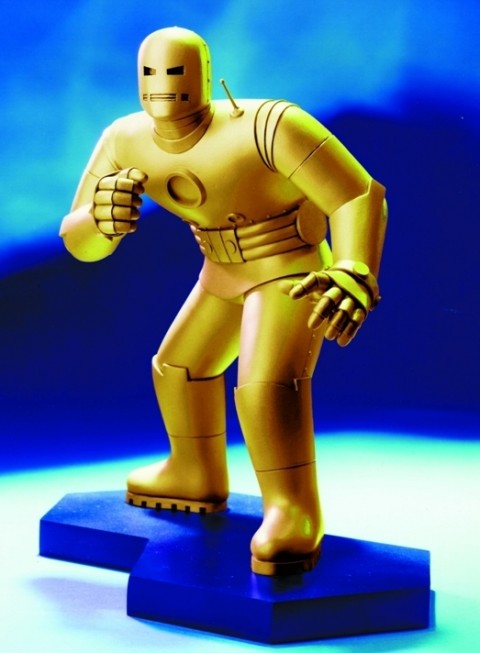 I’ve been asking myself repeatedly as we packed the house up whether or not something has been used or come into play the last five years: if not we’ve been getting rid of it. Of course that logic doesn’t apply to my comic collecting, but maybe it should. When I was a single young man in his first apartment comic posters adorned the walls. My future wife bought me my first statue, Iron Man in his original armor, gold variant (that’s not the actual base pictured above but a prototype from Bowen Designs). I’m sure she’s regretted it every since. When we got married and moved into our first house comic items were restricted to my office and our library, with some leniency for my Avengers issue 26 framed original comic pages.

Now that we’re moving to a smaller house I may have to cull the herd. The portfolios haven’t seen the light of day in quite a few years; same for the ad posters and that recently discovered box of DC Direct action figures. I found an original theatrical release Blade Runner poster with the Silver Snail receipt still taped around it showing a 1982 date. Better get that on eBay!

This all made me think of a post from Ed about his “man cave” and the need to have a place to call your own. The new house will have a library, albeit much smaller, but I’ll have a space to display my graphic novels, statues and comic art. Just not all of it.

Everyone who knows me is aware I read and collect comics; unfortunately few of them share my interest so it’s not a topic of conversation. It may flash briefly across the table but ends with either a blank expression of complete disinterest or a sort of mild disdain for something so juvenile. My kids think reading is an important part of everyday life, regardless of the medium, even though they’re both too young to know how.

Anyway, I’ll have my own space and some closet storage to keep the portfolios and possibly posters. But in the end what good is something if you don’t do anything with it? I sold my comic collection last year to a dealer so I received 45% of market price but was able to get rid of everything in one swoop including everything from the late 90s onward. Speaking to them about what I’d get for statues, about 25%, made me first get angry and then realize I’d rather keep them in the crawl space and rotate the five or so I have space for every few months. Or start listing on eBay. Or get a table at the next comic convention. Or start a buy and sell forum for southern Ontario.