Adam Hughes was at Boston Comicon this past weekend.  I arrived at his table around 10:05 AM on the first day to find his sketch list well over ten names, which I knew meant he wouldn’t get to me even if I was added to the list.

I’ve actually seen Adam Hughes four times at different conventions but never was able to get a sketch.  Way back at his first Toronto appearance I was on the list and even gave a deposit but I didn’t get a sketch.  His next Toronto appearance he had an injured thumb and couldn’t draw.  I next saw him in Chicago but couldn’t make the list; fellow writer Chris Owen did make the list and received a wonderful Princess Leia piece.  Anyway, he’s a great artist that commands a premium for sketches in the art market. 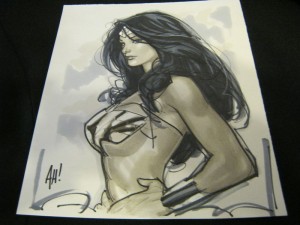 He completed three sketches over the weekend and was upset that one of them was on eBay: I saw it yesterday around $2600 but the auction was ended, probably because the buyer has been shamed on the internet.  The full rant is available at Hughes fans Yahoo Group or via Bleeding Cool.  Bottom line is Hughes will be using eBay to sell his sketches for about the same price they’re going for currently online; no more $200-$400 con sketches.  For me that’s still a large chunk of money and while they may go for significantly more online then I can’t afford one.

Alison Sohn, Hughes partner, made the posts mentioned above.  As well she said Hughes ” has to kill himself drawing” to get the convention sketches done.  If he’s charging $400 per sketch and it takes him all day to draw one he made $400 on top of his appearance fee for the show.  I realize artists come out to comic conventions for the fans but he had a table covered with sketchbooks and prints to offset his trip.  In the end he’s a business.  Every time I walked by his table at the Toronto show where he injured his thumb there were no fans; Hughes sat alone.

This certainly raises an interesting point: should artists sketch at conventions at all?  The problems with convention sketches are two-fold: you may not get one at all if the artist doesn’t finish his list and the quality can vary greatly based on time constraints.  Hughes seems to consistently produce quality sketches but very few per show so demand outstrips supply and there’s a healthy third-party market.

The best solution is to prepare a portfolio of sketches before a comic convention and offer them for sale at the show: this allows people to see what they’re buying and the artist doesn’t have to worry about getting a list of sketches completed.  Yes this doesn’t allow for sketches of obscure characters but most people want what the artist is currently drawing anyway, plus they know those character’s designs and will create a piece at the top of their game.

At the Boston show Stan Sakai had twenty or so Usagi sketches in different poses: I thumbed through and picked the one I liked best.  These finished pieces were $130 and his quick sketches were $50 but I knew I was getting an exceptional piece up front.  I’ve never seen a convention sketch compare to a sketch completed in the artist’s studio.  The same thing happened at Dave Johnson’s table: $100 sketches but he had two nice full figure pieces completed for $150 each.  Darwyn Cooke does this most shows and seems to sell everything he has.

A nice meet in the middle solution is for artists to take sketch requests before the show; they can even get paid beforehand and deliver the completed item at the show.  I saw this work successfully at Toronto Comicon this year with Bob McLeod, Chris Sprouse and Micheal Cho.