It’s finally here folks! After a year of ups and downs, twists and turns, the final issue of Brightest Day fell upon us last week. After the revelation of Alec Holland as earth’s protector in the penultimate issue of the series, issue 24 hopes to enlighten us as to Holland’s greater purpose, that of the elementals, the fate of Brand and whether Hawk and Captain Boomerang can fulfill their tasks. Onward!

In the wake of Blackest Night, twelve heroes and villains were resurrected. Each was charged with a task they were to complete to ensure the arrival of earth’s champion. This is Brightest Day. 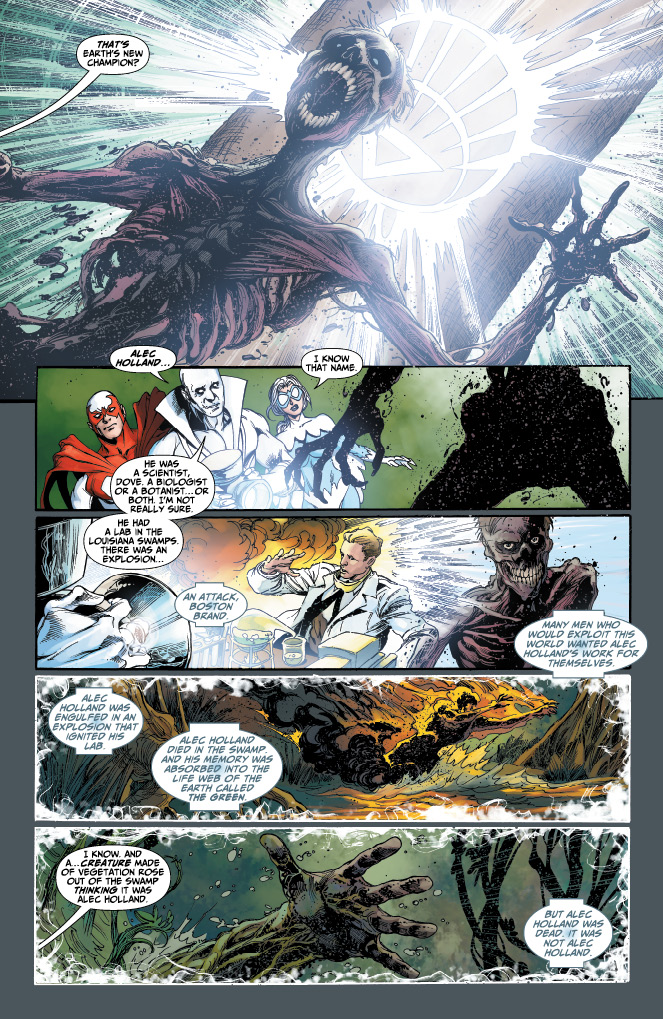 Earth’s champion stands revealed; Alec Holland has arrived to save earth. Brand quickly explains to Dove who Holland was, chronicling his death during a lab accident and the subsequent absorption of his consciousness by the entity that would come to be known as Swamp Thing. Meanwhile the tainted Swamp Thing entity pushes forward as the elementals attempt to prevent it from reaching the tree in Star City forest. The elementals succeed in slowing down the creature, and are called back to the tree for the next stage of their purposes. The elementals converge inside Holland’s corpse, instilling his husk with their essences. With Brand, Dove, and Hawk’s attentions elsewhere, Captain Boomerang slowly crept up behind them, urged again by the white entity to throw his boomerang at Dove. ‘Digger’ throws one of his boomerangs at Dove as the white entity tells Boston that in order for Holland to live, someone must die. Hawk attempts to catch the boomerang but fails to grab it. It continues its trajectory towards Dove as Boston pushes her out of the way. With the object firmly piercing his heart, the white lantern erupts with light. Dove catches Brand as he stumbles, the white entity telling her that it can’t fix his life this time. 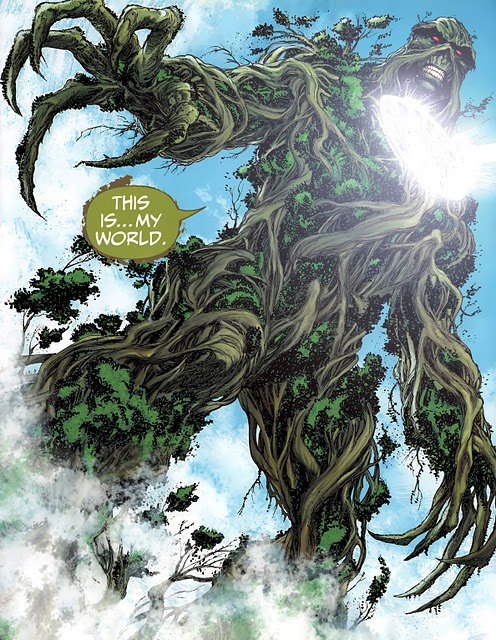 With his dying breaths, Brand consoles a tearful Dove, thanking her for everything she did for him and helping making his second chance at life matter. The white ring flies off his hand and into Holland’s corpse, returning him to life. The fauna in the forest springs to life and wraps itself around Holland who becomes Swamp Thing. Swamp Thing attacks and defeats the dark entity. Swamp Thing returns to Brand, Dove, Hawk and tells them Brand’s body will be protected; the white entity however alludes to a greater purpose for Brand after death. Now again incorporeal, Brand somehow is able to talk to Dove. They exchange ‘I love you’s’ and Brand fades away, while Swamp Thing begins to regenerate the earth’s forests. Brightest Day concludes with Swamp Thing killing the board of governors of a major company during a boardroom meeting. Later that night a man in a beige trench coat arrives at the crime scene. He lights up a cigarette, takes a puff, and seems less than enthused about Swamp Thing’s return.

The artwork in the issue is a greatest hits of the series’ artists, featuring the work of seemingly every individual who contributed to the series over the last year. Understanding that this was the final issue of the series and the motivations behind that art decision, I feel like it disjointed the storytelling more so than the series typically has experienced normally given its story structure. Rather than a cohesive issue, some of the pages featured inferior work to that of other contributors. Reis and Prado turn in their usual great work, as does both Syaf and Clark on their respective pages throughout the issue. Gleason’s contributions however still feel off, characterized starkly comparatively to the rest of the artwork. Perhaps the issue would have been better served to have uniformed the art duties, if only to keep Swamp Thing’s composition consistent as opposed to drawing him a handful of different ways. Throughout the series I’ve maintained that the artwork was the lynchpin in this series and has consistently been excellent. Trying to mash all the contributors into one book, even if it is over-sized, was a poor decision and kept the visualized story telling from forging its own identity.

After a disappointing previous issue, the final issue of the series failed to allow it to end on an absolute high note. Much of the issue centred around Swamp Thing’s reemergence into mainstream DCU, fighting against the Nekron infected dark entity; a mirror of swamp thing tainted by “the black”. Moreover we saw the culmination of the main characters’ stories, leading to their reversion to their normal power levels and states after Swamp Thing consumed their elemental powers. Most importantly Brand ultimately sacrificed himself to protect and subsequently save Dove from Digger’s boomerang, gaining the appreciation for life he lacked during his first lifetime. I felt like this was the best story of the series, which I’ve maintained from the beginning. Although it didn’t turn out like I thought it would, Geoff Johns’ story about second chances reached no higher than Brand’s. The others were a little more sporadic, ranging from the less interesting Martian Manhunter and Aquaman stories to the Firestorm and Hawk stories.

As a whole I feel this series was a let down. Despite the series’ huge reveal in issue #23, it still feels peculiarly timed while the main subject (Swamp Thing) is an odd addition to the mainstreamed DCU. I don’t feel like the story justified a year-long series and could have been told much more concisely than it was, as much of this series’ issues felt like filler. There were truly only a handful of remarkable issues in this series, and I can’t help but feel like I wasted my money on these books. As for the stories spiraling out of the series, who’s to say what’s next? For the most part it feels like we’ve been returned to the status quo of a year ago with each character fundamentally where they were, albeit with minor tweaks. Each primary character is provided one final page or so where their next stories are alluded to, and hopefully this results in a new series or continuations of stories for lesser cases. There are clear plot threads left dangling and hopefully they can be elaborated on in some form. The largest development is obviously Swamp Thing. What stories can be told at this point are difficult to say, and I’m not sure at this point how viable a series would be or what kinds of stories will be told using the character. Even more, how often another Vertigo mainstay in Constantine will be used to supplement the character’s plot given their history is another question I have; primarily if it compromises the integrity of Hellblazer. However, if the murders of the CEOs is an indication, the long-term story opportunities are not promising.

Altogether I can’t help but feel like my time was wasted with this series, and this final issue did little to alleviate my criticisms it. I would not recommend this series in a collected format, much less serialized.