I wrote a review of Nemesis this week and as usual I like to link up to the publisher’s page, grab their description and see if anything extra is offered.  Every time it’s a Marvel book I cringe internally as Marvel’s website is terrible to find information at.  I normally use Google to search for the book on Marvel.com as the search box on Marvel’s site never comes up with what I’m looking for. 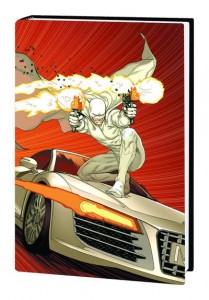 Let me use Nemesis as an example.  The Nemesis Premiere Edition hardcover was released February 9th 2011 to comic shops.  I know this for two reasons: I bought it that week and Marvel’s James Viscardi confirmed it in a press email that lists what’s shipping every week.   I went to Marvel.com and searched for Nemesis: this brought me to the four single issues of the series but no mention of the hardcover collection.  I then searched for the ISBN number but found no results: Amazon and Book Depository have the book listed for sale so I was able to get the ISBN number there along with the publisher’s blurb for my review.  Of course they don’t have an actual cover image of the book, just the Preview’s image Marvel released last year.

Not wanting to give up I looked at their comics on sale section for the week of February 9th but found no Nemesis hardcover.  Next I looked at all comics shipping in February 2011 with the same result.  Back to Google to search only Marvel.com for Nemesis (nemesis:marvel.com in the search bar) with still no results.  At this point I can only conclude Marvel doesn’t wish to promote this $24.99 hardcover.

This is unacceptable for a publisher today: the internet is your biggest advertisement available.  I’ve found the same thing at the IDW and Vanguard websites: poor navigation, poor search, odd or no organization and general lack of decent information for upcoming material.