Characters are people too, essentially. They are characters, obviously, but at their heart what makes a character in any comic special is their humanization by the creators of that particular book. At the same time, if we have invested ourselves in a character, what happens to them SHOULD affect us. In this case of course I’m referring to the ever taboo topic of killing comic book characters. Some deaths are cheap, some become permanent, some are teased for an issue and then fixed the following one. As readers, one way or another we invest our time and money into them because we love them. Consequently, when they’re killed off, a convictive response should be expected. 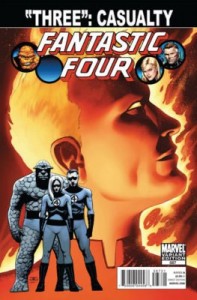 Presently death in comics is the latest flavour of the week. Johnny Storm’s death in Fantastic Four, while Carter and Shiera over in Brightest Day are the latest examples of dead characters over the last year; the latter series also promises more before the final issues come into our grubby hands. Then there is the Death of Ultimate Spider-Man story, as well as Marvel’s apparent willingness to kill a character during every quarter of the year. There is however a distinct difference between the DC and Marvel examples. This isn’t to say that either are any less permanent because I feel like they probably are. The difference here lays in how the stories are presented. In Brightest Day, I honestly didn’t think for a moment that the Hawks would be killed off. There was no real forewarning from DC and from my recollection that has been the case for the longest time. However, Marvel makes it routine to not only say they’re going to kill characters, but they exploit that story device only to sell books. We ultimately become desensitized to the idea of it, and at least at the personal level, I brush it off casually all too often.

I’m sure we remember what we were doing when news broke that Steve Rogers was killed at the end of Civil War, or more recently when it was revealed Johnny Storm had been killed off; but in the latter case we knew from the beginning of the story that someone was going to die. And that takes away from the allure or surprise of it. In doing that, comics lose part of their magic while the story itself ultimately becomes a secondary purpose where the higher function is commerce to the detriment of what’s a better story, or the best story.

Ultimately when the business is run this way, it brings the phrase “comic book death” to another spectrum of analysis.