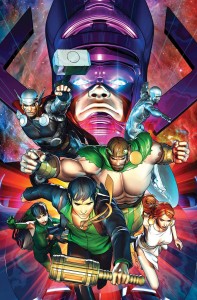 I did not enjoy Blackest Night. It was slow, repetitive, and about 4 issues too long. I was full of optimism when I cracked the spine on issue 1 but terribly disappointed when I closed the cover on issue 8. A friend told me that I didn’t read it right and that crossovers today are not meant to be digested as a single mini-series but as multitude of crossover books.

You see, I don’t read every stupid part of every stupid crossover; I just read the main story. However, this isn’t good enough anymore as major plot points are often included in side story issues. Thus, when Chaos War hit the stands I thought I would read every part and see if it is actually necessary to read every part to understand what is going on and think that the story is good.

Chaos War is composed of 19 parts: 5 were the main series and the remainder were character specific one-shots or two-part serials. The main series follows Hercules as he battles the Chaos King, while the other books fill-in what is happening to the other characters as they aid Herc in his quest. Chaos War is a big event book done right, and other creative teams should take note. The main series could be read by themselves and the reader would understand and enjoy what is going on; however, by reading the extra books you gain a better idea of the universe shattering battle unfolding in the Marvel U.

Now, that isn’t to say that all the extra books are good, but none were awful. The X-Men, Thor, and Ares issues were pretty lackluster; the Alpha Flight and God Squad issues were okay, and the Avengers and Hulk storylines were excellent. Of course it would have been better if ALL issues were great, but in my old age I have come to understand that I will most likely never see a 19 issue series in comic books where everything was great. Ever again. I can’t even remember ever before; I remember reading comic books as a kid, uphill both ways in the snow.

No story should have key plot points told in side issues. Crossover books should enhance the main product not be the load-bearing pillar that supports it. As Big Events are here to stay, publishing companies would do well to follow the Chaos War model, or utilize IDW’s set up for Infestation.

Infestation sees the Transformers, Ghostbusters, G.I. Joe, and Star Trek Universes infested by zombies. It  comprises two book-end titles and 4 mini-series of 2 issues each. Each issues forms part of the larger narrative, but if you only wanted to see Optimus Prime fight zombies you could just purchase the Transformers issues. This set-up for a big event is refreshing and I am enjoying how the story unfolds.

So lately I have been impressed with big event books, but over the last few years events have been hit or miss. Civil War was okay, Secret Invasion boring, Dark Reign had potential but a totally garbage endgame with Siege. Final Crisis was like having random comic book images beamed into my head, Blackest Night meh, and Brightest Day makes me ask “who cares”. All of this brings us to the big Marvel and DC events, Flashpoint and Fear Itself.

Marvel and DC have obviously realized that their big event books are the only thing that sells, and they have also realized that fans are tired of the never-ending stream of big event books. They have come up with an answer to this: explain as little as possible about the big event. No one can actually tell me what Flashpoint and Fear Itself are about. Sure, I know basically what it is about (I do have the internet after all), but mostly we don’t know who the main villain is, what the main story is, or what the heroes will be required to do. This lack of clarity is designed to entice the reader into buying the event. If we don’t know what it is about we can’t make judgements on how crappy it will be.

I would agree that big event storylines are now meant to have the reader purchase as many issues as possible. In some instances this wouldn’t be too bad (like Chaos War) but in other instances all the crossover issues are too numerous, expensive, and effing horrible. Dirty pool on the part of publishing companies to boost sagging sales figures with a plethora of issues.  I would also agree that these big event stories are sometimes completely incomprehensible if you only read the main series (I’m looking at you Final Crisis), but it really shouldn’t be that way.