I saw The Man Of Steel on the weekend, like a lot of other people. It was an enjoyable film, and set itself apart from the Superman we know from comics, movies and television. Working within its own framework, The Man Of Steel does a good job of showing where Superman came from, how he is who he is and what that does to those around him. 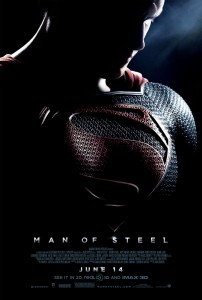 Let’s discuss the points that strike a chord with comic fans and moviegoers alike: be forewarned this will be full of spoilers. The biggest issue the film raises is Superman killing Zod. Everyone knows Superman doesn’t kill, right? Right? Well, perhaps comic book and cartoon Superman doesn’t but those parameters aren’t introduced in the film, and within the context of the story and the framework established Superman does what needs to be done to save people’s lives.

That being said the ridiculous final battles that destroy half or more of Metropolis must have killed tens of thousands of people as multiple buildings are toppled, plus the massive destruction of the World Engine, the Kryptonian terraforming device. Frequently throughout the film we see Superman saving innocents again and again, whisking them out of harm’s way. At one point Superman is fighting Zod through the air and into space, from what I can tell just so Zod can hit him with a satellite, but somehow fall right back into Metropolis and continue the largest, longest and dullest metropolitan destruction sequence.

Superman, after he surrenders himself to the U.S. army to be handed over to Zod as a selfless sacrifice, reveals his age to be 33. Other than the Christ reference this brings up I don’t see much point to it, but perhaps that is the point.

A group of Kryptonians with the same powers as Superman, trained from birth for combat, can’t defeat one man. The film tries to explain it away because he’s had all this time on Earth to learn to control his abilities, but within their combat suits they seem to have no control issues. With no concern for harming civilians they’re willing to trash whatever it takes to kill Superman, so how he wins is a mystery to me.

And then there’s the whole issue of why these prisoners of the phantom zone are put in stasis cocoons and then put on a ship to spend 300 cycles there. It looks like three devices in space open up the portal to the phantom zone, so why is their prison ship equipped with a phantom engine? For that matter why has Krypton’s technology stagnated for 20,000 years since their race for colonization? And why is everyone flying around on ships on Krypton but Jor-El is flying a dragon? What’s with every future civilization wearing black and crazy looking bulky armour?

Not to dwell too long on the abyss lest it dwell in me, there are lots of things that were great about the film. Lois Lane was great: very human and a fully developed character.  It makes complete sense that Clark Kent is a brooding and muted character, as he was raised to keep his abilities hidden lest he deal with humanity and their fear of the unknown. Each house of Krypton having a crest and that being the Superman symbol works really well, and every Kryptonian wearing a similar suit is nice. I know Superman’s costume needs a cape, but it doesn’t fit with the Kryptonian clothing, and I keep thinking of Edna screaming “no cape” from The Incredibles.

Superman is the straight man of the film, the sounding board that lets those around and influenced by him to rise above and achieve. Perry’s rescue attempt for a coworker comes to mind, plus Colonel Hardy’s ultimate sacrifice to eliminate the enemy ship. As the film repeats Superman is as a god and thus serves to inspire. Good stuff all around and well worth seeing.