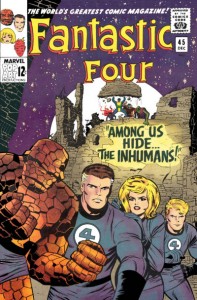 The Fantastic Four is easily the most important of the original slew of Marvel titles. Most of the time we focus on the importance of FF#1 and how it changed everything. While Fantastic Four #1 started the process of change it was the subsequent issues that continually laid the new ground that helped change comics for the better.

Yes Amazing Spider-Man is the most collected of all the Marvel titles but today that fact speaks more to the continuing popularity of the title character. These days even the X-Men rival the FF as a collected title but at the end of the day no title can match FF’s importance.

Where do I start, #4 with the re-into of the Sub-Mariner, #5 the 1st Doc Doom, #12 the 1st Marvel x-over, #13 the 1st Watcher, #25 the 1st Thing/Hulk battle and 2nd appearance of the Silver Age Captain America, #48-50 Silver Surfer and Galactus, #52 1st Black Panther and  #67 1st Warlock and so on. Did you know that Doc Strange, Sgt. Fury and Ant Man all had their 1st x-overs in the Fantastic Four? Many of the biggest moments in Marvel happened on the pages of the Fantastic Four, #6 feature the 1st Marvel Villain team up with Subby and Doc Doom joining forces,

To the stellar list above I’d like to add my Undervalued Spotlight pick of the week Fantastic Four #45.

This fantastic (sorry Stan) issue features the 1st appearance of The Inhumans, a very very cool team of superheroes created by the greatest creative team ever in comics, Jack Kirby and Stan Lee.

The Inhumans is a great concept, basically these guys are our old ancestors after a bit of tinkering by the space faring Kree civilization. Abandoned by the Kree The Inhumans developed their own civilization away from humanity’s prying eyes, that’s until the FF happened upon then of course.

The Inhumans consist of Black Bolt, Medusa, Lockjaw (my favorite), Gorgon, Karnak, Triton and Crystal (she marries the Avenger’s Quicksilver).

The Inhumans headlined the first 10 issues of 1970’s Amazing Adventures title, then the starred in their own title in 1975, it lasted 12 issues. The Inhumans are everywhere these days, they are present in every major Marvel storyline tied to their Cosmic Universe. Considering how much focus Marvel is putting on all things Cosmic you can bet the Imhumans will continue to play a prominent role.

There is even talk of an Inhumans movie but we’ll wait and see on that, personally I’d love a cameo in the next Avengers movie.

I’m not the only guy in comic collecting that likes to project and think ahead and it’s for this reason that Fantastic Four #45 has been heating up in the market these past 12 months.