Last week 20th Century Danny Boy posted a 1975 interview from Graphex fanzine with Jim Steranko. It’s a great read to get a glimpse into Steranko’s purview of comics; this quote nailed it. 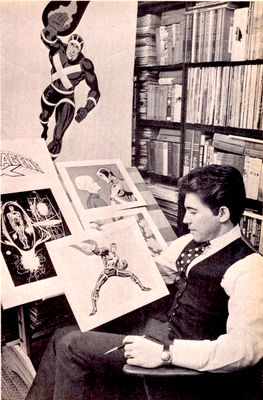 Drawing well is requirement in being a comic artist.  But, it’s not the drawing, look; you want to be in this business you draw well! If you don’t, you don’t go out and dig a ditch, shine shoes, or something else.  Even in my case, I don’t consider myself an artist because there are so many guys that draw better than I do.  I tell a story.  Drawing is understood, it has to be there, it’s not the most important thing, but frequently it turns up to be that way.  This pretty picture syndrome is not a good thing.  I mean there are guys who will bring their portfolios to art directors, like Romita, and all they show are single illustrations.  And as nice as they could be, it doesn’t mean anything because they want to see what you can do in sequence.

Coming from what most would consider the first comics superstar artist this quote resonates strongly today. Even so that’s a hard line about Romita since his run with Stan Lee on Spider-Man is considered by most to be the definitive take. I’m an art fan and have collected comics for a long time based on who the artist is. But if the comic doesn’t flow and can’t be “read” then it doesn’t matter how wonderful it is to look at. A comic is a wonderful blend of words and pictures; what is told through the words and what is told through the pictures combine to give the reader a complete entertainment experience.

The greatest storyteller working in comics today is Darwyn Cooke. When he writes and illustrates a comic the reader is presented with a well crafted story: words and pictures in harmony. You don’t have to look much farther than his work on The Spirit or Parker. These are cohesive works. Perhaps the lack of cohesion comes from a break in the creative team: Steranko reached his zenith when writing and illustrating the comic.

To take this quote and turn it on its side, there is a class of artist today that only does covers, having made their mark in the industry and now stick to pretty pictures; Adam Hughes, Alex Ross, Art Adams, Dave Johnson to name just a few. All highly talented individuals that can tell a wonderful story through their comic illustrations but have left most of that behind for the large payoff of doing covers. It’s a career choice and in the end we’re all working to make a buck but it’s a very large loss to the comics community when top talent stop telling stories.