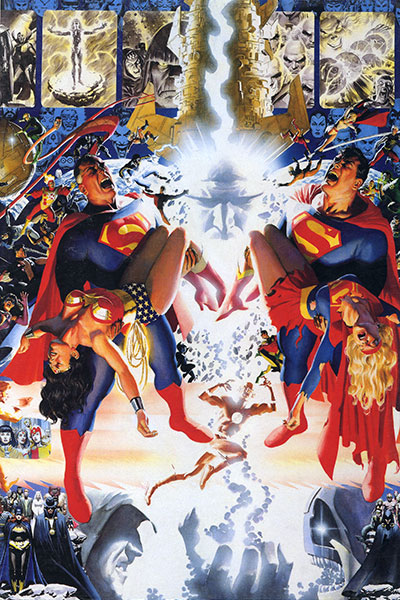 We talk a lot of about continuity at the CBD offices. It is one of our favourite topics.

Last week Kurt Busiek mentioned something on Twitter that has stuck with me. He was talking about how some people wish that the DCU would revert back to the “regular” DCU. Busiek correctly pointed out that “regular” means something totally different to everybody. For some it is post Crisis, to others it is solely Silver Age cheese, and to others it is Golden Age Nazi-punching goodness.

He also pointed out that even though Marvel has not had an official relaunch they basically are on their 4th era of comic books. Indeed for anyone only familiar with 1960s Marvel Universe many of the characters would be unrecognizable compared to their decade-of-love counterparts.

This of course got me thinking (again) about continuity and its importance in comic books. I hold that continuity is important, but only insofar as being able to tell a complete story. The reader needs to know and understand the rules and history of the story to be able to follow. But this doesn’t need to be maintained for 80 years straight. Indeed in some ways it seems like 10-20 years is the maximum that a continued narrative can go on without getting so convoluted that it becomes nonsensical or outright ridiculous and requires a reboot of some kind. I am not sure of how to fix this or even if anything could be done. Our choices seem to a necessary reboot or decades of history that may need to be ignored so as not to become confusing.

I understand that Holmes is in the public domain but even so, the important thing isn’t that Holmes is specifically a coke addict or smokes a pipe; the important thing is that he is a super smart British detective that uses deductive reasoning to solve puzzling cases. So for superheroes the important thing  is to maintain all the good, ageless stuff about them that makes them the character we know and love. Superman needs to be able to fly, have heat vision, ice breath, is from a doomed planet and is found as a baby by good, loving people. And his costume should probably stay basically the same (no electric nonsense).

Batman needs to see his parents murdered and use his wealth to develop himself into the worlds greatest Detective who happens to dress like a bat. That is it. But if I read a story and Superman’s adoptive parents are still alive when he is an adult who cares? Or if Gotham was secretly run by an evil cabal that has never been mentioned in any other Batman stories, again, who cares? The essence of the character is what is important.

And if a character gets rebooted every once in a while and a new, interesting take on certain aspects of a character are part of a story that is just fine. Batman and Superman could be Sherlock Holmes.

Alternatively, characters could be James Bond. James Bond is an ultra suave British spy who uses his charm and amazing gadgetry to fight evil around the world. If you have watched a James Bond movie you could write a James Bond movie. The character is the same in every movie. Sure, some actors have a bit of a different take on Bond but basically they are the same where it counts. It isn’t necessary to reboot a character like Bond. I know they did it with Casino Royale but it didn’t need to be a reboot. It could simply be viewed as an earlier case or whatever. The point is that I don’t need to watch Casino Royale to understand Live and Let Die. I don’t even need to watch the Blofeld movies in order to understand or enjoy them.

So comic book characters could be more like James Bond. There is some basic continuity but the what is more or less the same in each story; it is the how that captures our attention. I see Wolverine or the Punisher being good candidates for this type of story. The basic principles of the characters don’t change but each story shows us a new interesting take on how they do what they do. Even if it isn’t very nice.

The point is that you can’t simply hope that 60 years of continuity will magically always make sense so matter what new ideas and stories are developed by creators. Continuity is necessary, but not so rigid that it should stifle new ideas, block creativity, or discourage new readers.