But there’s one thing we haven’t talked about (at length anyways…), buying your stuff again.

Times change.  People change.  There will come a day when you look at your stuff and say “I don’t want that anymore.  I wonder if someone will give me money for that.”

So you pack up your stuff.  You head to your local comic book shop or online classified ad site or your friends and you say “Give me whatever money you think is reasonable for this stuff.”

Now that you’re happy with a bit of cash in your wallet, you got rid of that old stuff and now you have the money and the space for new stuff. But as I said earlier, times change and people change and then you decide you want that old stuff again.  So now you start searching frantically trying to find the things you once owned.  At times, it can be a challenge.

This started happening to me now.

A few years back I decided to reduce my collection.  I still kept the core things I love the most, but some of it had to go, to make room for the new stuff.  I sold off my old video-game systems.  My Atari, Sega Genesis and Playstation 2 were quickly converted to cash.  But now looking back I regret getting rid of some of those things.  Some of my PS2 games were really great.  I loved the PS2 Punisher game, and Grand Theft Auto Vice City was a pure classic that has never been duplicated since.

I was able to track down a used PS2 Slim for a good price, but then I realized that those games have become collectors items, and now I would have to pay 4 or 5 times more than what I was paid for them when I got rid of them.  That sucks!

But that is the price you pay for selling your stuff.

When I was purging my stuff, I got rid of some old trade paperbacks too.  I sort of moved on from those stories, and got tired of them.  Some of them seemed completely ridiculous at the time. 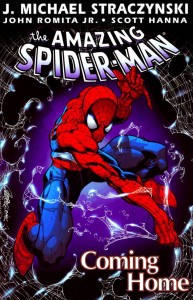 The Amazing Spider-Man: Going Home is one of those books that was ridiculous.  In case you don’t remember this “gem”, J. Michael Straczynski wrote a story about how Peter Parker wasn’t bitten by a radio-active spider and got his powers.  He was bitten by a spider, who was going to give him powers anyways… and it just happened to be irradiated at the time.  Peter teams up with Ezekiel, another “spider man”, and they fight a villain named Morlun, who is hunting down people with animal totem powers.

It changed the whole story of Spider-Man and Peter Parker.  The idea is ridiculous so I sold the book.

This week I read that this November, Spider-Man’s huge story event, crafted by Dan Slott, “Spider-Verse” is about the return of Morlun and him hunting down “Spider-People” from all the various universes within the Marvel Universe.

See… something that I thought was ridiculous is coming back… and I want that book back.  The risk of selling your stuff!

I know I’m not the only one who’s ever had this problem.  I would love to hear your stories too.  Use the comments below (or hit me up on social media) and let me know.  Did you sell your action figure collection as a kid, and are now trying to buy it back as an adult collector?  Did you sell off a comic or trade that you regret, and now want it back?

Tell us your story… about buying your stuff again.