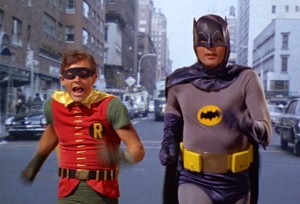 I am willing to bet there are a bunch of us, who our first exposure to Batman was the original TV series from the sixties where Adam West portrayed the Caped Crusader.

That is how it was for me.  I still remember catching re-runs of the show on Saturday afternoons at lunch time.  And that was before satellite too.  Heck… that was before the days of the “interweb”.  I remember having to watch through the electronic snow on the screen, and squint so I could see Batman and Robin “The Boy Wonder” thwart the evil plans of villains like The Riddler, The Penguin and that “clown prince of crime” The Joker.

Being a superhero fan back in those days, this is all we had.  Superheroes were popular then, but not at the same level they are today.  If we wanted to experience super hero action on the small screen, all we had was the 60’s Batman series, re-runs of Spider-Man from the 60’s and the odd chance you could catch a re-run of Super Friends (I didn’t have cable, so that was a very odd chance for me).

Now everything changed in 1989 when Tim Burton’s Batman became a huge hit.  That was followed by an amazing animated series (which is still one of the best cartoons ever produced).  But back in the early to mid 80’s there wasn’t much available.

The Batman series from the 60’s was campy and goofy.  It completely changed the tone and feel of Batman.  But looking back at it now, it was a reflection of the times.  It included parts of pop culture, psychedelic imagery, humour, action, and campy goofy fun which became a worldwide phenomena in the  60’s.  Sure it changed the character and it took creators like Denny O’Neil and Frank Miller to bring the character back to his dark menacing roots.  But ’66 Batman is important because that’s how many of us (some of us are in our 60’s now too) discovered the character Batman.

Batman ’66 is making a resurgent comeback too.  It was several months ago when I noticed in Previews that there were action figures coming out based on the series.  I am not a big DC toy collector, but my love of the series immediately piqued my interest in picking these up.  I have been able to locate only Batman, Riddler and Penguin at regular retail, while I have found Joker, “Surfing” Batman and “The Dynamic Duo” at a specialty store.

Generally the figures are economical, for what they are.  But availability will drive up the market on these, so you may have to shop around depending on your budget.

Action figures is not the only thing that has come out to celebrate the TV series.  DC Comics has released a title called “Batman ’66” which continues the adventures of Batman in the same tone and feel as the TV show.  It is wonderfully written by Jonathan Case.  He has been able to capture the feel and essence of the series and when you read it, you can just hear Adam West and Burt Ward’s voice in your head.  It is a must read.

The comic series features covers by Michael Allred, and though I am not a fan of his art, his cover’s for Batman ’66 are amazing, and are worth “the price of admission alone”.

I hope this new found love for the 60’s Batman series will lead to its eventual release on Blu-Ray, but that discussion has been mired in debate over rights issues and royalties.  For me personally… I couldn’t care less.  I just want to have a copy of the complete series in my hands, so my kids can grow up watching Batman the same way I did.