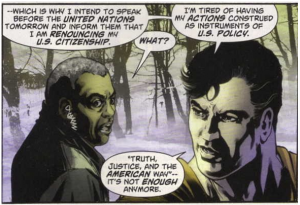 Last week Action Comics #900 was released, and the world was shocked at Superman’s revelation that he was going to renounce his American Citizenship.  The “right”-minded media jumped on this story, calling Superman “Un-American” and blaming the creators for destroying an American icon.

Wow, things have really changed in a week.  Now we live in a world where America’s #1 bad guy is gone.  The American news networks now focus on Osama Bin Laden and thankfully the issue of Superman’s citizenship is virtually done.

I have been thinking about this story all week and I wanted to vocalize my thoughts on Superman’s citizenship debate.  When I first read the headline “Superman Renounces U.S. Citizenship” my first thought was, why do they have to mess with Superman?  Why do they have to mess with something was at the core of the character?  Truth, Justice and the American Way.  But then I did something that some critics haven’t, I read the comic.

In case you haven’t read it, here is a quick review.  Superman says that he has fought time travelling despots, costumed criminals and psychopathic monsters, but the one thing he hasn’t been able to stop is hunger, poverty and human suffering.  So Superman heads to Iran to stand with protestors as they protest the government.  The government monitored social media sites and figured out who the protest coordinators were, and they mysteriously disappeared.  Superman stood with the protestors and did nothing – just stood there.  The military did not advance on the protestors, and the protestors numbers grew.  When Superman felt he had made his case, he flew off, and noticed a protestor giving a soldier a flower.   In return Superman is chastised by U.S. government about his actions.  This is when Superman lets his intentions known that he plans to renounce his U.S. citizenship.  He doesn’t want his actions being construed for U.S. policy.

After reading the comic, I sympathize with Superman.  He has unimaginable power, but he can’t fix the problems in our world that need fixing.  Sure Superman stood for Truth, Justice and the American Way, but he should stand for something more than that.  Superman means more than just those ideals.  Superman is a global citizen.   Superman can use his power to help change the world.

Now after saying that, I don’t want Superman to become a global advocate and attend peace rallies all the time.  I like seeing Superman fight time travelling despots, costumed criminals and psychopathic monsters, but this new global perspective gives depth to the character of Superman.  It gives Superman other ideals to fight for.  It opens the door so He can appear globally and not just be stuck in Metropolis anymore.

This is a shake up that Superman needs (if DC decides to proceed with it).  There hasn’t been this much talk about Superman in the media since his death in the 90’s. It made me take notice.  I haven’t purchased a copy of Superman since the “For Tomorrow” story arc in 2004.  My main reason for buying #900 was the citizenship issue, but I am very pleased with the rest of the book.  The first story in the book, the Reign of the Doomsdays, is pretty cool and I will definitely be reading that series when it comes out in a collected edition.  Whether this shake up means an increase in  long-term sales will still need to be seen.  Hopefully it is enough to generate increased sales for big S and generate interest in Superman.

I have one last thought on this issue.  What about Clark Kent?

To all the critics who have bashed Superman for his actions, what about Clark?  Clark Kent is a part of Superman and he will always be the Kansas farm boy.  So I don’t think there will be much to worry about Superman becoming “Un-American”, even though he is from a distant doomed planet, he was raised with mid-western values by the Kents. 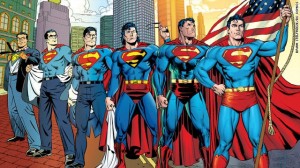