This week I wanted something different to read.  So I asked the Twitter-verse to help me out and tell me which comics I should pick up this week (you can follow me too @EdCampbell_CBD).  Just using the hash-tags #comic, #comicbooks and #comics, I asked which comics should I pick up this week?

To my surprise I did get some suggestions.  After going through the suggested comics, here is what I picked up this week. 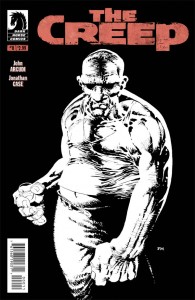 The Creep starts off with a page without dialogue.  We see a young man sitting in his bedroom.  He then puts a gun under his chin then….

As we enter our story we find out about our hero, Oxel Karnhus.  He looks different.  Because of that he faces ridicule from the neighbourhood.  He suffers from agromegaly, which is a disorder of the anterior pituitary gland when it produces too much growth hormone (WWE Legend Andre The Giant suffered from the same condition).

Oxel receives a letter from his old college sweetheart that her son, who was the young man on page one, has committed suicide.  She knows that Oxel is a private investigator, and thinks that he can help her.  Two months prior to her son’ suicide, his best friend killed himself as well.  She tried going to the police, but they just attributed it to teenage depression.  She wants Oxel to find out the truth behind the suicides. 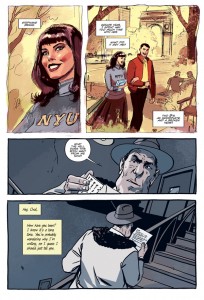 He travels to see the mother of the “best friend” and he finds out that the two families were close, and his old sweetheart’s father may hold the key to the double suicides.

Oxel searches out the Grandfather and finds out that he suffers from severe mental illness.  Could there be some conspiracy behind these deaths, or does it have something to do with a genetic disposition towards mental illness?

This book is different from my normal weekly purchases.  I usually read Fantastic Four, Daredevil or G.I. Joe and The Creep is a noir detective drama.

It has a different feel to it as well.  Oxel looks like he’s out of the 40’s.  The story feels like it takes place in the 80’s.  And the flashback scenes to Oxel’s college days looks like it’s the 50’s.  It’s a big mish-mash of different eras and the artwork pulls it off really well.

I think the writing is superb as well.  It was a very enjoyable read and I think I will pick up The Creep #1, when it comes out. 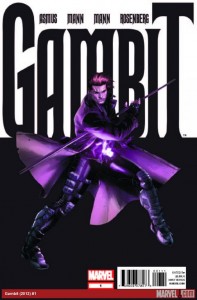 Our favourite Cajun X-Man, Remy LeBeau aka Gambit, has left Xavier’s school.  He is on his own trying to find out who he is.

The one thing that hasn’t changed for him is what he has always been.  A thief.

There is going to be a party at the estate of Borya Cich, who is rumoured to be connected to the “costumed bad-guy underworld”.  The other rumour that persists is that Mr. Cich has a cache of confiscated “super-villain” weaponry on his premises.

That is the reason our old pal Gambit is going to crash the party.

Gambit runs a quick recon mission while he is at the party.  Checking out the estate’s security so he will have a plan.  During the party he meets a beautiful girl, who will no doubt return to the pages of Gambit in the future as a possible love interest for our hero. 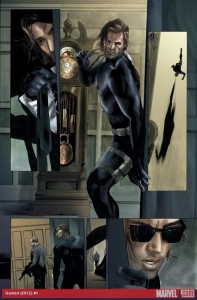 After Gambit has his plan to get a hold of the confiscated weapons.  Looking more like Ethan Hunt of Mission Impossible, rather than our card slinging telekinetic, he uses gadgets and his wits to gain entry into the weapons vault.  Gambit finds what he is looking for but trips the security measures in the vault, Gambit has to evade the security counter measures and has to escape the vault.

After he slips back into his formal best, Gambit uses the cover of the beautiful girl to leave the Cich estate.  When he returns home, he relaxes while looking at his stolen treasure.  A “starfish” looking object appears out of the weapon/treasure then attacks Gambit.  He is left on the floor of his apartment in cliffhanger fashion.  To be continued in issue #2.

This book is a different departure for Gambit.  When I picked it off of the shelf I thought we’d have a normal Gambit story.  Lots of “flashy exploding cards” and beautiful women (and maybe an appearance from Wolverine).  It felt different because it is more like a heist thriller.  I made the comparison to Mission Impossible earlier, and it has that feel to it.

It’s kind of like Winter Soldier.  Instead of being a superhero story, it is a great spy thriller.  With Gambit, we get a heist story that just happens to star an X-Man.

I don’t know if I will buy issue #2.  Issue #1 was very enjoyable, but I am not compelled to buy the next part of the story.  I got a quick glimpse into Gambit’s life right now, and that is enough for me at this time.  It may be a series I pick up later in trade format. 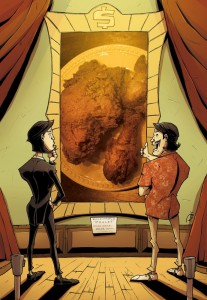 The prologue of the story takes place at an art auction.  Chow Chu is bidding on a piece of artwork, but a rival keeps bidding higher and higher.  Eventually the painting sells for $900,000, and Chu’s rival flips him the bird and gloats over Chow Chu.

The story then turns to the present and Toni Chu is in bed with her lover.  He says to her that he sees a future with her.  They embrace, and she bites him.  He calls her a psychopath and leaves.  Toni is disappointed because this always happens to her.  Toni is cibovoyant, which means “she is able to bite into anything alive and see upcoming events in their life”.  After she bit her lover, she knew he would leave.

Toni goes to the hospital to see her brother Tony who is in a coma.  While there, her older brother Chow comes in and says he has a job for her.  They leave the hospital and then head to Barnabus Cremini’s apartment.  Barnabus was Chow’s rival at the auction.  He is also Chow’s business rival as well.

Chow wants Toni to lick Barnabus’ paintings to see if he’s been making fakes of them so he can cash in on an insurance fraud scheme.

While at the apartment Toni investigates the paintings.  But it was just a ploy to get a hold of Barnabus’ recipe book which were recipes he had stolen from Chow.

Chow gets his revenge on Barnabus, and gets to flip him the bird in victory.  BAAAMMMM!

The only thing I didn’t like was I had no idea what was going on.  Since I am not a regular reader of Chew, I have no idea who the characters are, or what has been happening before this issue.  I know that issue #26 is 4 issues ago, but I chose this one because I was advised it was the beginning of that particular story arc.  I am intrigued by Chew, and I may grab some of the trades to find out what Chew is all about.

This was an interesting experiment.  I enjoyed buying comics that are not part of my normal reading habits.  I think The Creep will be a new title I stick with.  Out of the three I chose from my Twitter suggestions, it was my favourite.

If you know of a comic book I should try, tweet me, and let me know.  Or leave a comment below.  I am always looking for something cool and different to read.