Another Fan Expo has come and gone, and this year, I had the good fortune of being able to set up as a vendor. In the past, I’ve set up at both the spring and winter show but I’ve always avoided the summer Fan Expo due to the high cost. However, I have lots of inventory left over from buying out a store that was closing down. Although I’m a big proponent of eBay, somethings you just can’t sell online due to the added cost of shipping. As well, the cost of setting up at the spring show has really creeped up over the years to near Fan Expo prices anyways, so when I was offered half a table, I accepted.

I saw all the regular people here who attend and set up at shows, but Fan Expo being the big attraction that it is, I also knew there would be lots of people who specifically and only attend FanExpo. There were many people from outside the city and tons of ordinary families taking part in the pop culture event. So, although it was expensive to set up, I rationalized this cost against the 100,000+ people who would be attending.

The cost for one table was $1100, plus tax and $128 for two parking passes, which works out to just under $700 (or $685.50 to be exact) for half a booth or 4’x 8’ strip of space. I maxed out my small space with a couple of retail shelves for the back and filled it with merchandise I wanted to liquidate. I think most people are curious about the earnings so here they are:

Day 1: I sold a few ungraded books totaling about $300. Not a great start I thought, but it was the first day and I assumed that most people would be tired from working all day.
Day 2: I sold even less on the second day. I netted out at only $200 which made me nervous. At this rate, I was barely going to recoup the cost of setting up.
Day 3: I decided to switch up my inventory and brought some CGCed Hulk #181’s to serve as eye candy for the back wall. These are the kinds of books I prefer to sell online but I brought them anyways to help generate traffic. It worked and I ended the day at $1,400.
Day 4: I made further adjustments to my table. I put away stuff that people didn’t seem to be interested in and added more of the merchandise that was actually selling, which also gave the products a noticeable presence on the table. I ended the last day with $2,400.

That’s a total net of $4,300 during the four day session. I was happy with the results because:

How do the results compare with other vendors? It’s difficult to say since people are not as forthcoming with their numbers. Some vendors around me said they were bringing in $5k per day, which seemed kind of high considering what they were selling. As well, I could see first hand where the crowds were gathered. There were also whispers of $250,000 or nearly $400,000 in sales for the larger set-ups, which I find hard to believe. Many vendors tend to talk big and are boastful, however, I’m told the general rule of thumb is to make 10 times your set up cost, which puts me behind the curve. There were a few vendors with $20,000+ set-ups so if the rule holds true, I suppose it’s possible. The person I was sharing the table with netted over $10,000 on 3 to 4 large sales, which goes to show that it is possible to achieve big numbers on very few transactions. Still, I think my partner would have been happier with less money if the transactions were smaller but more frequent. Not to mention, once a key book is gone, you may end up paying more for it down the road if you ever wanted it again. 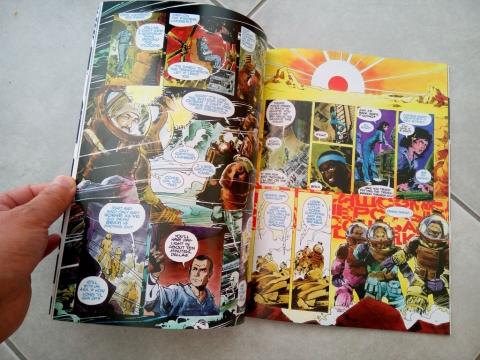 I love Walter Simonson’s work but I’m not a fan of the colouring. Hope it reads well.

So, what have I learned from my Fan Expo experience?

• The pop culture market, being what it is these days… comics alone are not enough. Less than half my sales came from comics, the rest was from stuff like key chains, toys, superhero watches, etc. You need to have variety, both in terms of merchandise and pricing in order to cast a wide net.

• Most buyers are not knowledgeable about the value of comics, or other goods for that matter. Many of the sales were impulse purchases so it helps to have a good presentation.

• Having said that… many items can be found at a very wide price range. But eventually, the market will tell you what it can bare.

• I personally don’t like pushy sales people, especially those who like to spin stories. I usually know what I want and what I want to pay. However, I have found that if you talk to people you have a much greater chance of a sale, which is a lesson for those introverts who prefer to sit quietly behind a table. If all else fails, offer a discount.

• There’s was no point in holding on to merchandise. If I was offered anything above my cost, I would accept. There’s no shortage of goods out there and buying is a lot easier than selling so I was happy to let things go if the opportunity was there.

• This last point is an important realization for me. As I mentioned, I picked up inventory from a store that was shutting its doors. I made the purchase mainly because I wanted to try out different merchandise. While I can see that there is a huge market for stuff like Pops and other kinds of toys, I realize that these products simply don’t interest me. So although toys can bring in just as much money or more money, my first love is still with comics. I enjoy buying, selling, reading and being immersed in comics. More specifically, I like older books and I like the art. Although older books may be less sophisticated by today’s standards, they have more charm and less pretense. And I view the art as being fundamental. This basic ability to draw is foundational to all other forms of art and even visual communication… so when I see comic art, I see potential.

My primary goal was to be rid of all the toys and stuff that I acquired, so I was happy to have cleared some merchandise. I also enjoyed chatting with people, which was part of the fun. It can be difficult to have an intelligent, objective conversation among “fans” so I appreciated the few grounded attendees who stopped by my table. I heard some complaints among the the vendors, but honestly, considering the size and scope of the show, I thought it was all handled very well.

I know that some people are curious about the earnings from these kinds shows so I hope I provided some insight. But keep in mind that this is just a hobby for me and I’m far from being your typical show representative. I don’t have the kinds or quantity of merchandise that a full time vendor or retailer would have. If you have enough material and the time, I encourage you to fill out an application and sign up for Fan Expo 2017. Experience is the best teacher and I think most people would enjoy the action on the floor.