My previous post was a book review that I did for my graphic novels class. Here is the second review I did in the more traditional essay form. If you’ve ever browsed around a book store in the comics section, you’ve probably stumbled upon Understanding Comics by Scott McCloud. As the title suggest, McCloud thoroughly explains how comics work, from history to art expression. It makes a great reference for anyone who is new to comics or for those who are trying to break into the biz. The mandate for my essay was that it be argumentative and so I narrow in on McCloud’s claim that comics is an art form: 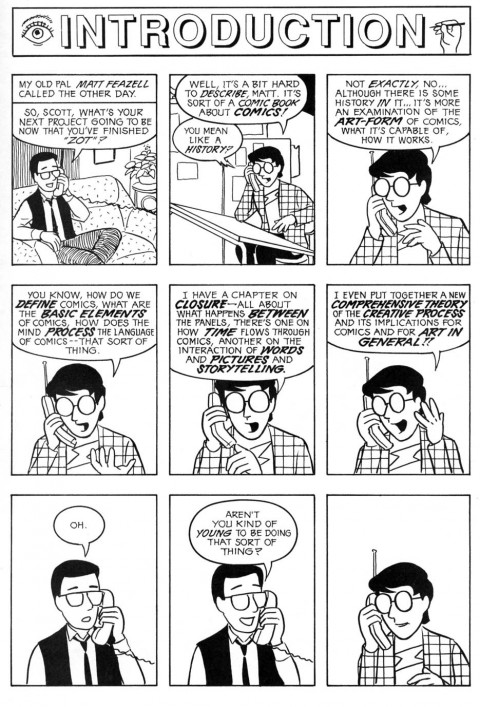 Understanding Comics by Scott McCloud was informative, very thorough and entertaining to read. Scott McCloud goes into great detail discussing the many ways in which comic books can be read and interpreted. He also does a great job of unpacking issues and concepts that I would have deemed to complex to properly explain, but he presents it in a logical and simplified way that is well organized and easy to digest. In reading Understanding Comics, it is clear that Scott McCloud wants comic books to be more then what it is. He wants comic books to be seen as an artistic medium and for it to be taken more seriously. He goes in depth to compare comics to art, referencing history, and visually maps out the many ways in which art and words are expressed. Interestingly, he doesn’t discuss the topic of commercialism beyond the origin of comics from the early days of print. He also uses a very broad definition of art to try and bring comics into its sphere. Much of this is semantics and doesn’t really add or take away from the enjoyment of comics. It is, however, an effort to promote comics by shaping its perception, which is understandable since most people who enjoy something would speak of it in high regard. But, by trying to associate comics with art and literature he confirms a discontent that is shared by many in the comic book industry.

I’ve been working as a graphic designer for the past 20 years in two different cities, Toronto and Hong Kong. I have always found it odd that throughout this industry, it is rare for graphic designers to refer to themselves as “Graphic Designers”, opting instead to be referred to as simply “Designers”. Others prefer to appropriate advertising titles such as “Art Director” or the more recent extension “Design Director”. Some just make up titles like “Provocateur” or “Imaginator” or “Imagination Developer”. Graphic designers claim that the term “Graphic Design” is too limiting and does not accurately describe what we do. Graphic designers like to see themselves as problem solvers who are engaged more on a cerebral level. Despite the fact that my mother and bank managers find it easier to understand the term “Graphic Designer” as a job descriptor, we still prefer the more vague “Designer”, which is fine within the industry but outside of the industry it’s usually followed up with the question… “What kind of designer?” At which point we are required to provide a deep explanation of what we do, or we can simply succumb and say, “graphics”. Like the comics industry, graphic design is vast. We prefer not to be seen as that person who sits behind a counter at a quickie print shop cranking out layouts for a flyer. Designers want to be respected and be seen as professionals on the same level as architects, engineers or at least an interior or industrial designer. Graphic designers want to be seen as experts who should be consulted in order to grow a business. 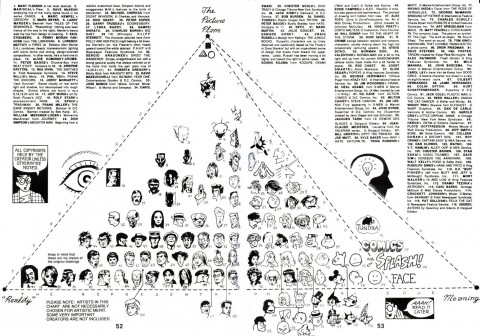 The comic industry suffers from similar issues of perception as graphic designers. By comparing comics to art and literature, the industry is basically saying “we are just as good”… and by virtue of this statement, they are also saying the opposite at the same time. The problem I have with this is that comics are not intended to be art or literature, and they do not function the same way. A much more accurate comparison can be made with products, or specifically popular magazines but McCloud avoids this topic all together. Could it be that commercialism is not good enough to be associated with comics in his view? Although there are those who endeavour to create art, most comics are designed to be a source of affordable, ephemeral entertainment, much like magazines. The comic book is mass-produced, sold and purchased in a store. It is a source of revenue for publishers, distributors and the stores that sell them. A commercial product can be considered art, and it often is, if and when it transcends its purpose and becomes more than what it was intended to be. How, when and why this happens is a big mystery that most likely involves timing and chemistry. There is no denying that comic books put into practice artistic and literary sensibilities so admittedly, to make comparisons is natural and understandable. While it is true that all things man made have some degree of artistry, things like the hammer, the wheel and houses were inspired more by need. At its highest aspiration, one can consider these items as art but sometimes a car is just a car and there is nothing wrong with that. 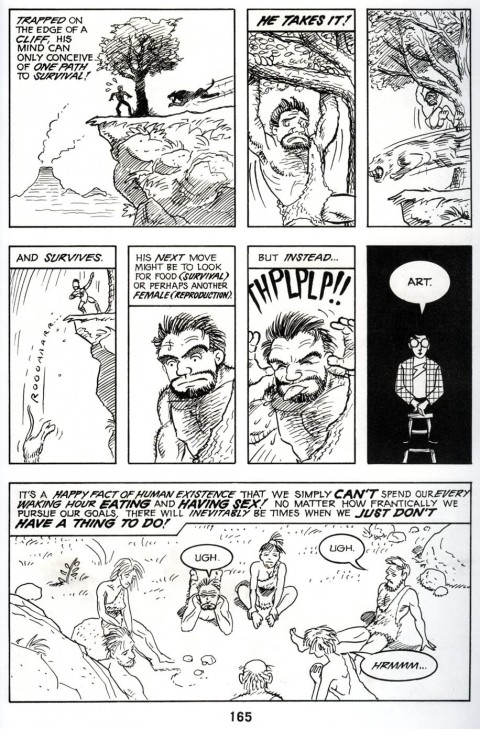 McCloud considers anything outside of survival and reproduction to be art. Art is a difficult subject to explain. Even the practitioners are unable to define it, including an influential institution like the Art Gallery of Ontario (AGO). Although one might be tempted to challenge McCloud’s explanation I am not discounting his interpretation. In seeking answers about art, his explanation is one of the most rational I’ve come across, and I appreciate his ability to simplify such a complex topic in order to engage a diverse audience. The problem, of course, is that art is always changing. What started out as the development of hand and eye coordination in an attempt to mimic the visual world, over time art has evolved to become an exploration of ideas that reaches beyond our senses. We can question the practicality of this development but in the end, current art means different things to different people and thus it has become a state of mind. My personal feeling is that the future of art lies in the commercial world. I see the American artists of the 1960’s and the Pop Art movement as having heralded what I believe we are experiencing today… that is, the rise of commercialism as the new art. Never before has advertising and products been so entrenched in our lives and culture. Products, brand names and even commercials have become so anticipated that a simple product announcement has become a spectacle. Artists like Bansky have satirised this dynamic through his antics as products continue to create brand centric sub cultures where an endorsement from a celebrity can greatly influence our behaviour. So, why would McCloud and the comic industry want to be associated with the traditional art world when comic books are poised to be meaningful right where they are? With the effects globalization and the ubiquity of pop culture, comic books have the potential to be a driving force behind a new kind of art. 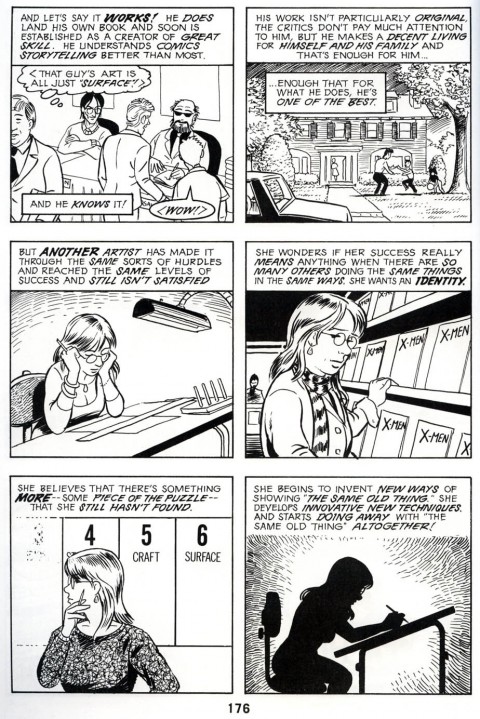 I discovered comic books as a child and it put me on a path toward art. At the time, I believed that art was a higher form of expression because people around me told me so. Eventually, I have come to realize that the creative pursuit is not limited by definitions or conventions. As much as I enjoy art, I take issue with the contradictions in the art world. To some degree, art is elevated by the fact that it is not easily understood. By comparison, comic books are much more approachable and democratic. From young kids to scholars, comic books are varied enough to be enjoyed by everyone. Perhaps the question we should be asking is; in what way would comic books be better if it were considered art? The industry of comics is multi-faceted and therefore it lacks a singular vision. It faces some daunting challenges as technology continues to commoditize comic books in the face of an already declining trend in readership. However, comics are a rich source of ideas, a medium that has no bounds. The current appeal of comic books is that it can be all thing to all people.

I would recommend Understanding Comics to any one who has an interest in comic books. It is enjoyable to read and it covers a lot of ground in helping the reader decode the comic book language. Art has its own purpose and function in society, and I will continue to enjoy art for what it is. However, comic books are much more accessible and potentially influential as a medium of pop culture. Perhaps some day comics will be more widely accepted as art but its accessibility and its place in pop culture are aspects which I hope we will not lose.

My mark this assignment was also 78%. In fact, I received 78% for all my assignments in this class… including participation.