I was at a local shop last month wanting to buy an X-Men #120. The book was certified by CGC as a 9.0 but the slab was cracked and scuffed so I thought maybe I could negotiate a deep discount. But instead, the store owner (let’s call him John) was asking double the market value. John explained that he had just gotten the book and didn’t have the chance to break it out of the case yet so that he could price it as a 9.4.

Needless to say, the deal never happened and I had to laugh. It’s easy to shake our heads and label John as a scum bag… but this is very common practice. Not just among dealers but collectors as well. Buyers with a keen eye know how to spot a sharp certified book, break it out of its case and pass it off as a higher grade book. In my previous write up, I considered doing the same to a couple of books I received from CGC recently. Both my Adventure into Fear #19 and Hulk #141 presented very well for their assigned grade, but got hit due to a light water stain on the back cover, awarding both books a measly 4.5. I felt that these books were comparable to a 6.0 or even higher but evidently not by CGC or Overstreet standards. 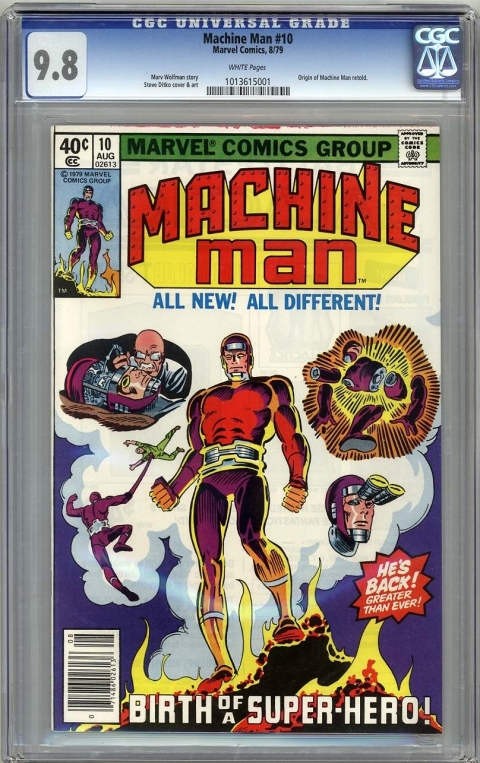 Apparently, distribution ink that spills over can still achieve a 9.8.

It was difficult to be upset at John. After all, he is a business man, he has been dealing in comics a very long time and he is free to grade the books as he feels fit. Overstreet and CGC may have their guidelines but it’s not a perfect scale and no one says we have to follow their standards. As well, the results from Overstreet and CGC are often inconsistent, but how could it be otherwise? No one person can grade all the books in the world, and even if they could, mood and frame of mind affect us all. The counter argument, of course, is that John stands to benefit from grading his own book higher, so his judgement lacks objectivity and is extremely bias in favour of his book. And whether you agree with Overstreet or not, it is a bench mark that helps collectors to communicate, unifying the community, much like having rules in sports, so that we can all play the same game. Also, if and when the time comes to sell the book, it would be difficult for me to pass off the book as a 9.4 with the qualifier that “John” says it’s a 9.4. I mean… who the heck is John? Whether he is right or wrong about the grade, what weight does his opinion carry? Still, there is a large group of dealers who refuse to deal in CGC books because they simply don’t believe in it. Perhaps these dealers are stuck in the past but if you’ve been in the hobby long enough, I’m sure you can also understand their frustration with certification.

The reverse can also be ethically confusing…

The other book that I discussed in my last post was Luke Cage, Hero for Hire #1. In my write up, I state that my strategy in selling this book is to keep it slabbed as a CGC 7.5 so that a potential buyer could not look inside. The book itself is in fairly nice shape but suffers from an overspray of distribution ink. The covers don’t look too bad and but the inside is definitely a turn off. The quirk here is that for some reason, Overstreet and CGC tend to hammer books for having a water stain and yet are forgiving when it comes to distribution ink. I’m not clear why they do this, but I’d much rather have a light stain instead of dark ink. I suspect it may be a case of manufacturing versus handling. If a book is manufactured with flaws, then it is what it is. For example, many Silver Age books have off-set staples but that is simply the result of the technology at the time. However, if book has acquired flaws after having left the printer, then it’s been “damaged”. A condition that is not of the original state and something that could have been avoided. While there is a logic to this rationale I don’t agree with this line of thinking (if indeed this is the case). We all know what a perfect “10” should look like and so I personally think that the grade should be determine by how far removed a book is from that perfect “10”, regardless of how, why and where the book became flawed. In other words, it should be determined by the net result and not the process, even if the process is unavoidable. Other examples of this are miscut books, bad cover wraps and dog eared pages. In all these cases, the certification tends to work in your favour. If anyone disagrees with the grade, you can simply point out that the pros at CGC have certified it as such and no matter how severe the flaw, you can basically leverage CGC’s opinion to help sell the book.

So what are we to make of all this? Well, philosophically speaking I would say that both actions or scenarios are wrong or dishonest since it misrepresents or conceals the truth… but who’s truth are we talking about? We can certainly delve deeper into a discussion of morals and ethics but this is a comic book forum so practically speaking, we all want an advantage. The practice is wide-spread and we also know that CGC often get things wrong themselves. So is it unethical to disagree or agree with them? I don’t think it is, but when we stand to gain from our own assessment it puts the authenticity of our belief into question. That is, are we being honest about what we think… or have we “convinced” ourselves to think a certain way due to a personal bias, or worse, are knowingly lying to ourselves for the sake of a pay day?

People are emotional creatures and science has determined that people will believe what they want to believe. In other words, we are deluded and flawed by nature. So, despite my failed attempt to pick up a cheap X-Men #120 from John, I don’t hold any ill feelings toward him. Yes, his judgement is questionable but I think we can simply chalk it up to salesmanship.

No book is 100% free from flaws so I think the solution is to become familiar with the various defects. Eventually, a personal preference will develop but at the same time, it’s important to keep in mind how Overstreet and CGC may assess the imperfections, especially if resale is on your mind. In the mean time… does anyone need a sharp looking Fear #19 or Hulk #141 that looks like a 6.0… or maybe even a 7.0?