Dark Horse Presents has a long and noble pedigree. Its first inception in the ’80s and ’90s featured work from some of comics’ masters, from Mike Mignola’s HELLBOY to Paul Chadwick’s CONCRETE. Frank Miller’s seminal SIN CITY even found its beginnings in the pages of Dark Horse Presents. Alas, the title was canceled in 2000, only to resurface in 2007 as MySpace Dark Horse Presents, a short-lived partnership with the erstwhile place-to-be on the Internet. Although a lot of great stories were produced for that title — the trade paperbacks of that run are fine additions to any collection — the decline of MySpace and the unusual nature of the format led to the title being canceled again in 2010. 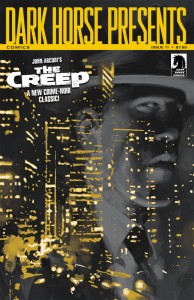 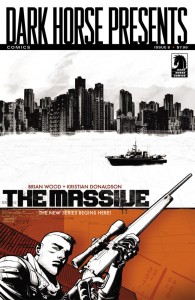 When Dark Horse announced that it would yet again resurrect the title in 2011, this time as an 80-page ad-free monthly anthology, there was much speculation as to how well it would be received. Although never a mega-hit, the book has sold well, and it recently won an Eisner for Best Anthology. It has also featured stellar storytelling, including work from Richard Corben, Evan Dorkin and Jill Thompson, Steve Niles, Neal Adams, Fábio Moon, Brandon Graham and a host of others. An ongoing FINDER series from Carla Speed McNeil has been a particular highlight.

Another strategy becoming apparent in DHP is that Dark Horse is using it as a kind of testing site for new ongoing series. Although the older incarnations of DHP spun off several full titles in their own right, there seems an intentionality to many of the stories that appear in the new DHP, almost as if they were “pilot episodes” of new series. Several have been non-starters: The overlong BLOOD and downright boring MARKED MAN (which is inexplicably being collected into a hardcover in November) felt like flops, and some stories, such as 13 and RESIDENT ALIEN, began strong but eventually tapered off into the realm of ho-hum. In some more successful cases, perhaps even premeditated cases, Dark Horse has collected the serialized stories into issue #0s to kick off new ongoing series. Here I’ll talk about two of the better titles, John Arcudi’s THE CREEP and Brian Wood’s THE MASSIVE. 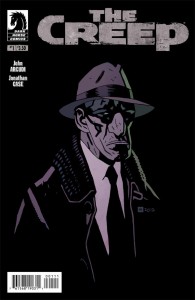 John Arcudi is a man who must be much loved by the Dark Horse editorial team. He has scripted many books for the company over the years, including the ’90s hit THE MASK. He joined Mignola’s HELLBOY spinoff, BPRD, early on, and at this point has written more Mignolaverse comics than Mignola himself. His collaboration with Guy Davis on BPRD was one of the most consistently excellent runs in the history of comics, and his work with other artists usually holds up to the high standard he set with Davis. That his pet project, THE CREEP, has received a 4-issue miniseries comes as little surprise. And not everyone can get Mignola to be their cover artist.

THE CREEP is Oxel Karnhus, a private investigator with many demons, not the least of which is his acromegaly, a disorder of the pituitary gland that causes him to have an abnormally large face, painful headaches and excessive sweating. It’s a very real disorder; André the Giant was one famous case. Another was the black and white horror and noir film actor Rondo Hatton, whose visage Oxel is clearly modeled after. In Oxel’s case, the disease set in after he finished college, so many of the people he knew from earlier in his life haven’t seen his current mug. It’s a mug that gets him stared at by children and heckled by teenagers on the street.

But his life goes on, and a mysterious woman from his past contacts him and asks him for a favor. Her son, Curtis, has committed suicide, two months after Curtis’ friend Mike killed himself. Although the police are willing to close the case, she is not. She wants to know why. And since Oxel still carries a torch for the woman, he can’t help getting himself involved.

THE CREEP first appeared in the original DHP incarnation, but Arcudi has called this new version “a fresh start,” so no prior knowledge of the world is required. The Dark Horse Presents shorts (later collected as THE CREEP #0) serve to introduce the cast of characters and to sketch out the main conflicts. It also introduces us to the artwork of Jonathan Case, whom I first noticed in last year’s GREEN RIVER KILLER graphic novel, also from Dark Horse. Case has a clean brush stroke style, and while his figures are cartoony they are not exaggerated. Well, except in Oxel’s case. BPRD phenom Dave Stewart contributes subdued and melancholy colors to this subdued and melancholy story.

Issue #1 gives us a better insight into Oxel’s character and advances the plot ever so slightly. Arcudi puts so much humanity into his characters, whether it’s fishman Abe Sapien or one of the many ordinary human characters in BPRD. His characters’ successes never come without a cost, and their failures weigh heavily upon them. He seems to be able to communicate facial expressions to his artists with consummate skill.

THE CREEP is a purely human story so far, and that Arcudi so gracefully makes the transition from writing apocalyptic monster-driver stories to stories about inner demons is exciting. That being said, there is an undercurrent of FREAKS-esque horror and the macabre spectre of teen suicide in THE CREEP. This story is not quite 60 pages old, and already it’s one of the most interesting comics of the year. 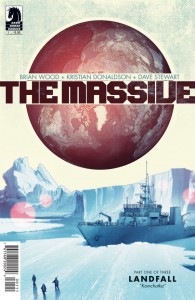 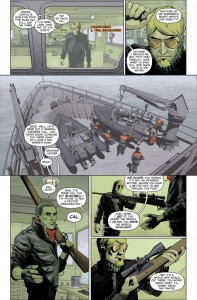 Whereas Arcudi’s THE CREEP is a relatively small story about (sometimes big) people, Brian Wood’s THE MASSIVE is a story as big as they come. Its heroes — with names like Callum and Mag — are members of The Ninth Wave, a sort of eco-activist group that operates out of two ships, the Massive and the Kapital. In issue #1, the crew of the Kapital are searching for their lost sister ship, the Massive. The world has undergone extreme changes — climatic and economic — and the crew are trying to figure out what their role is in this new world. Issue #0, which collected the shorts that first appeared in Dark Horse Presents, serves as a primer to the three main characters. Each short in turn shows how Callum, Mag and Mary ended up members of The Ninth Wave.

The shorts that appeared in Dark Horse Presents felt less like a pilot than a prologue, and I can only assume the series was planned far ahead of the shorts’ appearance in the anthology. But I like to think that the success of the book is in part thanks to the buzz created by the DHP shorts. That is if comics can even generate audible buzz in 2012.

Much of the first issue is devoted to the details of the Crash — the nickname given to the global calamity in which our heroes find themselves — but the first three issues constitute an arc titled “Landfall,” and as the Kapital searches for its lost mate, its crew find themselves in the line of fire of some rebel thugs and Mary ends up separated from the crew. While not quite the swashbuckling adventure that the DHP shorts seemed to promise, there is plenty of action. There’s also a lot of chatter about ethics and geopolitics, so the book can feel somewhat talky at times.

The art for the prologue shorts and the first arc is provided by Kristian Donaldson, whose excellent draftmanship is perfect for stories about huge oceangoing vessels and cities half under the sea. Again Dave Stewart supplies his color expertise. The team has created a book with very high production value, and although it feels like the surface has barely been scratched by issues #3, there are big ideas here, and THE MASSIVE will be a series to watch in the coming months.