One of the most exciting things for me in my collecting adventures has been the discovery of the original art market. Now we all collect comics for different reasons. For some it is the stories, for others it is the art, and then others collect runs or story arcs because of the creative team. Byrne/Claremont on X-men, Adams/O’Neil on Batman etc.

For me it was always the art first then the story. When I was rebuilding my collection I discovered original art for sale. One of the reasons we collect comics is the rarity of the issue. With original art, it is the ONE and ONLY kind of rare. My first piece, which is attached below, was a Big John Buscema pencil layout which I have never successfully identified, although I do recall seeing the finished page somewhere. It cost me around $100. Now this piece as you can see is not signed but it is unmistakingly John Buscema. I was in awe at again the seemingly effortless way his lines flowed. 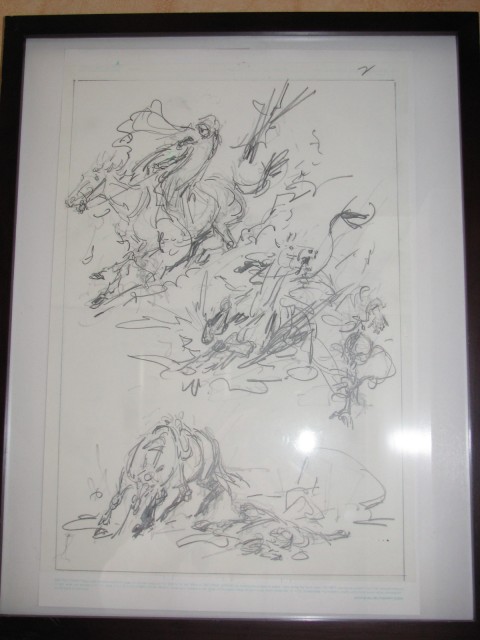 I quickly picked up another Buscema piece from Savage Sword, again for around $100 inked by Pablo Marcos.

I quickly learned that original art could become a very expensive addiction indeed. Fortunately just like in the comic biz , there are some great people in the original art business. You will meet them at the Cons except they are few and far between compared to comic book dealers.

If you are interested in becoming familiar with original comic art, a great place to start is Comic Art Fans(CAF). This is a site where hundreds of collectors share their art in a virtual gallery so you can see what is out there as well as buy and sell.

There is a great book called GrailPages Original Comic Book Art and the Collectors. It is a great introduction to the world of comic art collecting. It contains scans of some of the most incredible original art that exists.

Now the prices can be anywhere from a few hundred dollars to in the tens of thousands and yes, even into the hundreds of thousands. These high-end pieces are regularly for sale in the major auction houses like Heritage and ComicLink and if you go to the CAF site there are advertisements for all of the major and minor players from Romitaman to Albert Moy .

Now the high-end comic book market has seen some incredible increases in value over the last few years and the original art market is no different.

The best piece of advice I got was from a fellow collector I met years ago at Fan Expo. His advice is good advice. Buy what you like and you will never be disappointed. Speculation can drive you mental, but if you buy a piece because you like it you will never be sorry.

I have to warn you though. Once you start down this path, you will become hooked! Collecting original art is an addiction! There is always another piece that you will have to get. It never ends! But for me it has added another dimension entirely to collecting. 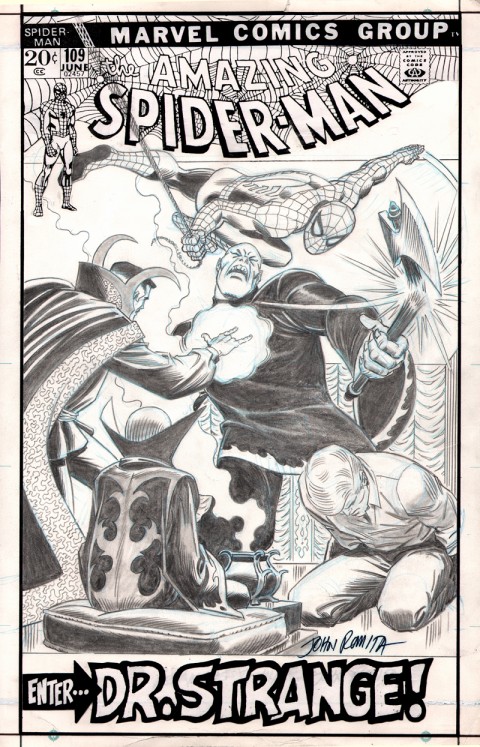 This piece is one of my favorites. It is the full pencil cover to Amazing Spider-Man #109. John Romita Sr. John took his original blue line pencils from 1972 and then finished it in full graphite in 2007, complete with the cover stats to complete the cover. It is incredible, the detail and tonal quality he brought to this piece. Hopefully the scan will look pretty good here, but to see what it really looks like in all it’s glory, it will be part of the upcoming John Romita Artists Edition Vol .2 which should be coming out in about a month. Here is a sneak peak as well as a pic of JR Sr. holding the finished piece (top left).