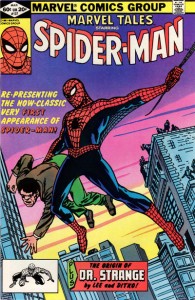 We’ve featured a reprint book before on the Undervalued Spotlight. It was actually Marvel Tales #1 that got the nod and deservedly so. In 1964 Marvel Tales #1 was needed to satisfy the legion of new fans that had discovered Marvel a couple of years too late. Marvel Tales #1 allowed new fans to catch up on their favorite new heroes and it helped secure the beachhead for the Marvel Revolution.

In retrospect one could argue that Marvel Tales #137 came along at the right time too. The early 1980 were boom years for comic book collecting, comic book shops were opening up everywhere giving the burgeoning collecting community a place to gather and hunt down elusive back issues.

Marvel Tales #136 featured a reprint of Amazing Spider-Man #159, a book published 6 years prior. In 1982 such reprints were unnecessary since more and more collectors were now able to hunt down these relatively recent back issues.

Deciding to reset Marvel Tales #137 back to Spidey’s 1st appearance in Amazing Fantasy #15 was the right thing to do at the right time. If nothing else it re-introduced one of Marvel’s most important comics to a new generation and perhaps more importantly as far as our hobby is concerned it re-introduced the book to the new growing legion of collectors. Amazing Fantasy #15’s were hard to come by even in the early 1980s and if you were lucky enough to hunt one down you’d have to pay some crazy prices, we’re talking hundreds of dollars!

In my view Marvel Tales #137 spurred demand for Amazing Fantasy #15 entrenching it as a must have key issue.

Luckily you can still find Marvel Tales #137 in bargain bins if you look hard enough.

As an added bonus Marvel Tales #137 also reprints Strange Tales #115’s 8 page origin of Doctor Strange. I’m high on Doctor Strange these days and this is just icing on the cake for our book. And if you want to talk cherry on top of the icing then I’ll point to the Hostess ad page where Captain America and Nick Fury defeat alien invaders by giving them Hostess Fruit Pies.

This is a fun book to collect. Who wouldn’t want to read the Stan Lee/Steve Ditko 11 page Spider-Man intro in old newsprint comic format? Crinkle it up a bit, leave it in the sun, tear off the cover, have a few sips of wine, you’ll think you’re reading the original.

Marvel Tales #137 represents a cheap fun way to play comics, I see very little down side to this book.

Not much activity for CGC copies, a CGC 9.8 sold a couple of years ago for $31, on eBay you can pick them up from anywhere between $2 and $9.