When it comes to comic book movie blockbusters, do you try to find all the news and secrets about the movie before it’s released?  Or do you want to be completely surprised by the outcome?

If you want to be surprised, you better avoid the toy aisle at your local toy store.

You may not have thought about this but those action figures that come out to support the latest blockbuster extravaganza, can actually give away secrets of the movie, or even reveal some of the major scenes of the film… and all it takes is a quick look at the packaging. 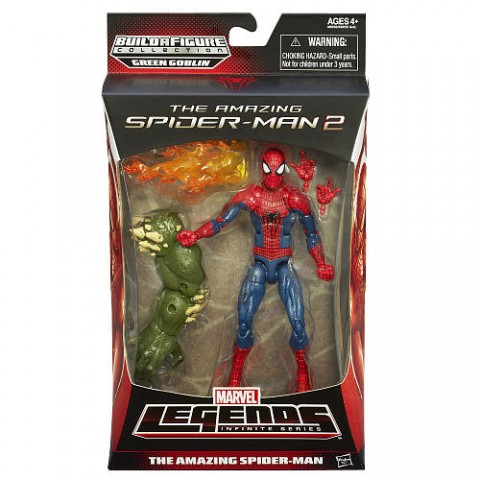 The toy line for Amazing Spider-Man 2 will be hitting retail shelves very shortly.  The series that will really grab the attention of action figure collectors will be the new Legends Infinite Series.  The ASM2 series consists of 6 figures, with pieces to assemble a 7th.  The characters are Spider-Man, Superior Spider-Man, Black Cat, Carnage, Beetle and Electro (movie version).  The 7th “build-a-figure” is Green Goblin.  But not the familiar glider flyin’, pumpking bombin’ alter-ego of Norman Osborn.  It is the massive and menacing Ultimate Version of Green Goblin. 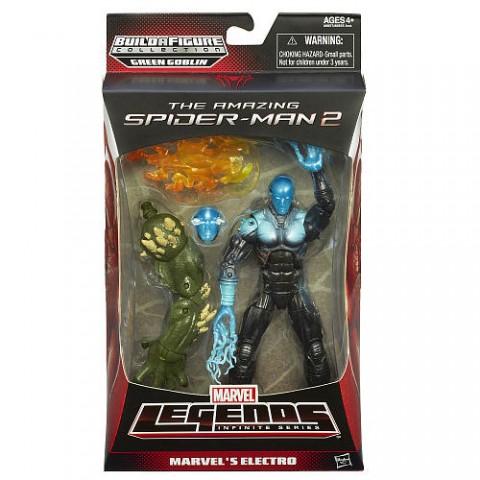 But could this monstrous Green Goblin be a sign of things to come in Amazing Spider-Man 2?

According to the description of the toy… it could be…

This heroic The Amazing Spider-Man 2 figure will take on Green Goblin and his dastardly schemes, [source], and he comes with a right arm part for you to build a Green Goblin figure! Collect all 6 parts (other figures sold separately) to complete the evil mastermind’s body, then send him and your Spider-Man figure into battle.

Isn’t Electro the villain in ASM2?

Is Green Goblin the villain behind everything?  Is he the shadowy figure in the credits of the first Amazing Spider-Man?

Even Lego is getting on board with Spider-Man toys.  And they are showing a movie version of Electro, mixed with an Ultimate version of Green Goblin.  Is this the toy industries way of telling us what to expect in the future? 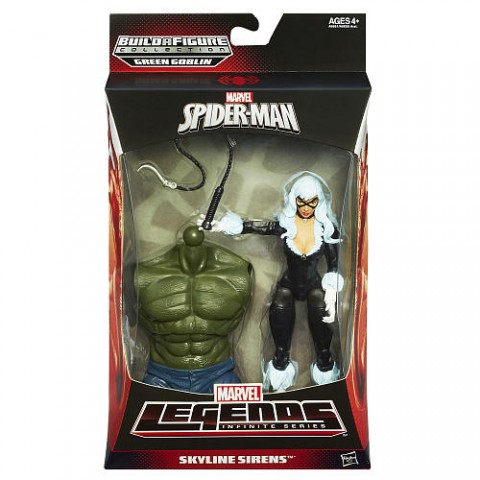 There are specific reasons for these “movie spoilers” when it comes to toys.  Shelf life.

The shelf life for the movie is basically 2 months, give or take.  Sure, there’s some promotion before the movie, but after it’s been in theatres for a few weeks the excitement dies down.  Eventually the movie leaves the local Cineplex, and it’s forgotten until it comes out on home video release.

But a toy’s shelf life can last up to 2 years, until the next installment of the franchise comes out.  Since the toy has to sit on the shelf for so long, key plot points to the movie have to be made, so kids (or adults like me) can have those toys and re-enact those pivotal scenes at home.  If these “surprise” characters aren’t produced, there are less pieces in the line to sell.

When it comes to movies, the final product you see on the silver screen differs from the original idea.  Scenes are changed, altered or even deleted.  There are lots of factors that come into play.  It could be a decision by the director or producer.  Perhaps the movie didn’t play out well with the test audiences.  Or maybe the final version of the movie had to be cut back because of time.  These lost scenes become bonus material on a Blu-Ray somewhere.

Production of toys is a long and daunting process.  The designs for toys are produced in the early stages of the movie.  And sometimes the scenes, details or characters that are deleted from the movie, still come out in action figure form.

A good example of this is Roadblock from G.I. Joe Retaliation.  In the initial stages of the movie, Roadblock was going to be trained by Snake Eyes to be an Arashikage ninja.  Roadblock could never quite get the hang of the martial arts, so he developed a set of pistol grip brass knuckles to help him fight against the Red Ninjas who work for Cobra (this was explained in the IDW prologue comics for Retaliation).  The action figure for Roadblock comes with the brass knuckle “battle katas”, and they are even shown on the poster for the movie.  But in the final version of the movie, they are never shown or even mentioned.

This is just a case of a change made in the movie, but if you collected the action figures, you would know they had something planned that never made it to the screen.  And it wouldn’t make it into the bonus features of the Blu-Ray as well.  It’s just a nice little treat for the toy collectors out there.

It makes you wonder what will be revealed next for other blockbuster movies like Captain America: Winter Soldier, Guardians of the Galaxy… or perhaps Star Wars Episode VII… which spoilers will be revealed when that toy line comes to the shelves in 2015?

Thanks to Anthony for coming up with the idea to this column, and getting me excited for the new Spider-Man action figures.