I was in a Chapters a few weeks back picking up some non-comic book related reading material and decided to take a walk over to the Graphic novel section. My copy of Batman Year One had mysteriously disappeared and I thought I would see what the new hardcover edition looked like. I found the Year One Hardcover but decided against the book at this time. 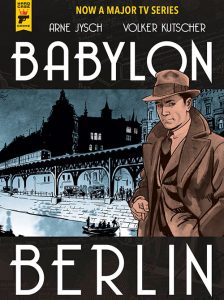 However, when perusing through the mammoth B section featuring more Batman stories than you can shake a stick at, a book called Babylon Berlin jumped off the shelf and into my arms! Figuratively speaking of course.

Babylon Berlin is an oversize hardcover approximately 8″x11″ and a whopping 216 pages! What grabbed me about the cover was that it had a ring of familiarity about it that felt familiar. After checking the book out briefly, I thought it looked somewhat like Alex Toth and David Mazzucchelli all rolled up into one. Alex Toth is quoted as having said: “Strip it all down to essentials and draw the hell out of whats left.”

The artist’s name is Arne Jysch and from his bio, it looks like he has made a name for himself as a storyboard designer and animator.  I get the feeling that he is well aware of this quote. I would bet my last dollar that David Mazzucchelli lives by this quote as well.

The writer is Volker Kutscher who was an editor at a German Daily Newspaper who then stepped into the world of historical crime fiction, focusing on the history of his native Germany.

I loved this book from the moment I started it. The story follows the life of one Gereon Rath recently demoted from Homicide to Vice and takes him through the seedy underbelly of 1929 Germany. 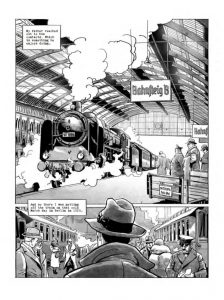 You want something different? This is it.No long underwear, no capes, just a great story and great storytelling. The artwork truly has captured the feel of Europe just before the Second World War.

Having never heard of this I was surprised to see it was a major television series in Europe and the 3rd season is just about to begin.

I streamed the first episode of Season One and am hooked! It is in German with English subtitles but my mother and father escaped Europe after the Second World War and I grew up understanding German and Belgium and the dynamic of listening to this in German has added an extra level of submersion into the story.

So if you like crime noir, or even if you have never read any before, this book is highly recommended. It certainly has many adult themes and situations you would expect in the seedy underbelly of the Weimar Republic.

And if you have the ability to stream, check the show out, but the book is fabulous.

Here is a promotional trailer to give you an idea of what to expect!

Oh, by the way, I found my copy of Batman Year One. In the bookcase I searched through at least ten times. I guess it went missing that way so I could find Babylon Berlin!