I often find myself arguing between Dennis the Collector and Dennis the businessman. The good part of this argument is Dennis always wins, one way or the other. But seriously, it is difficult sometimes to pick and choose what to buy on a limited budget.

Take this week for instance. I came across a couple of raw Fantastic Four issues: number 3 at around 6.5/7.0 and a number 5 at around 5.0. The number 3 was a particularly nice looking copy. Now this is an issue I have never owned and always wanted to. The FF appear for the first time in costume and the Fantasticar ( or the flying bathtub ) also appears for the very first time. The Jack Kirby cover is one of my favorites: the FF in all their glory. To say Jack Kirby had a way of designing dynamic covers is an understatement, but this is a great example of how much of a vision he had for his characters.

The second issue, number 5, is the first appearance of Dr.Doom and the only issue Joe Sinnott inked before his legendary run that started in issue #44, several years later.

Neither of these issues comes cheap, in the $2000 per issue range. Now whenever you are looking at spending that kind of money the inevitable thought of restoration, colour touch and trimming rears its head. Fortunately the dealer that has it is reputable and therefore that is mostly eliminated from the equation. 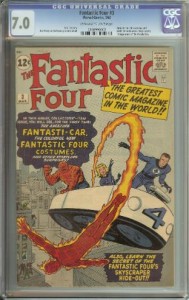 I haven’t pulled the trigger yet on either but the CGC 7.0 is a sweet copy and certainly has my attention.

Being on a limited budget, the collector in me says go for the CGC 7.0 but the businessman reminds me that it would probably be much more profitable to save that $1700 and put it towards an FF #1 or other key Silver Age titles and repeat the process a couple of times to make the $1700 up to get that FF#3 CGC 7.0.

FF#3 even with the first FF in costume and the Fantasticar will never be as valuable as FF#1. So I think it is a necessary fact that you have to be able to separate the collector from the businessman and vice versa.

Collecting on a budget certainly does have its challenges, but the hardest to live with for me is the separation of collector/businessman.

Which way would you go? Continued Happy Collecting !