With the upcoming Age of Ultron storyline for the next Avengers movie on it’s way, it would be easy to use that as a reason for this weeks column. I have been working on my graphic novel called Splashdown, and am at a part in the story where one of the main characters is overcome with emotion at the negative ramifications of his actions. I was attempting to show the character with his head in his hands, overcome with emotion, and this issue, Avengers #58, came to mind. I am a huge fan of John Buscema and I thought about that beautiful full page shot at the end of the book when the Vision goes off by himself after being accepted as an Avenger and cries. It  is really a matter of nuance as an artist, to be able to convey that kind of emotion on a two dimensional surface. 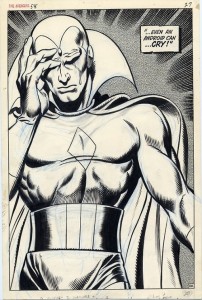 Now that full page shot was in no way near to how I have envisioned the layout of the panel, but that page came to mind anyway because what had left such an impression was the emotion it conveyed.

So I pulled out my copy and enjoyed looking through the storytelling wizardry of Big John Buscema. Issues #56-62 were the artistic team of  Big John and George Klein. I read somewhere along the way that John thought Klein was too overpowering on his pencils. I actually really like those issues. That short run is one of my favorites. Roy Thomas was the writer and he and John were an excellent team.

If you have a copy of #58, the 2nd appearance of the Vision, take a look at how John’s images and Roy’s dialogue work .The panel layouts, with figures breaking out from one panel and into the next. Sequences not necesarily framed within borders but designed in such a way as to open the story up and keep the eye moving in the proper direction of the story.

To me, these kind of issues are a clinic in how to create comics. Look at this 7 issue run and you will see this type of panel layout throughout .Very reminiscent of his run on the Silver Surfer which was being released precisely at this time. Silver Surfer #3 was on the stands the same time as this issue of Avengers and Silver Surfer #4, which could probably be argued as one of the best comics of all time, was a mere 2 months away.

It never ceases to amaze me how incredibly rich this period in the Silver Age actually was. A quick glance at the great “NOW ON SALE” back page featured Amazing Spider-Man Annual #5 (Red Skull and Peter Parker’s Parents), Spectacular Spider-Man Magazine #2 (featuring the Green Goblin) and Fantastic Four Annual #5 (featuring the birth of Reed and Sue’s baby and the menace of Annihilus).

Most of those characters are featured in all the current and upcoming movies. I mentioned a few columns back that Annihilus would be a great villain in the FF Reboot. Lets see if this 46 year old “NOW ON SALE” page hits a home run and  is indeed prophetic.