When writing my article “Keeping Kirby’s Legacy Alive” I did what you are supposed to do…research. I briefly mentioned John Byrne’s 1991 Omac Prestige series. 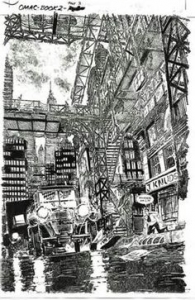 I did not reread the mini series at the time but simply mentioned how much I enjoyed it originally.

So as I was looking  at the “Kirby Legacy Long Box”, I grabbed the 4 issue Prestige Format series and reread them.

What a great read! It was like looking at it with fresh eyes because I don’t think I really have checked this out since 1991, which was coincidently when I stopped collecting comics and sold my collection, not returning until twelve years or so later to see what was going on with my former passion, only to learn Kirby was gone and Big John Buscema was ill and shortly after also passed away.

If you haven’t read this story I really urge you to do so. Fun, inventive and incredibly well written and drawn.The story is set in the 1930s and involves a very well conceived time travel story placing Omac (Buddy Blank) in the heart of the great depression and the rise of Naziism without his powers and without his memories.

Byrne used a Duoshade art board for the story. I have never used or seen Duoshade board (apparently it has been made obsolete by Photoshop) but it involved doing the line work the usual way, with pen and/or brush, and afterwards using a rather smelly chemical compound which would cause a shaded effect by allowing horizontal lines to appear on the page for shading purposes wherever you “painted ” on the compound.

It gave this book an authentic feel and was oh so appropriate for both the depression era streets and cityscapes as well as the futuristic world of Brother Eye and the sci-fi aspects of the story as well.

John Byrne once again takes Kirby’s original idea, of which Omac was particularly quirky, in a Kirby sort of way, and updates it without taking away from Kirby, but also at the same time changes almost everything, and nothing at all. 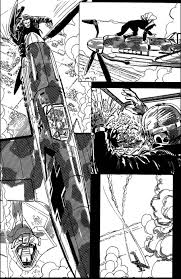 I know that sounds like a contradiction in terms but check it out and tell me where I am wrong.

You know, it has become very apparent that the real treasures in our collections may not always be the slabbed keys, locked away in their crystalline prisons, but the gems that we may leave alone for long periods of time without a second look, because they have no monetary value but are exceptional examples of the real reason we got involved in our great hobby to begin with. So by all means keep on getting the crystalline prisons but check out  those long boxes you have stored as well!