In honour of Jack “King” Kirby’s  birthday, I dug into a couple of long boxes to take a look at the King’s legacy. His entire career is legendary from the Golden Age on up. His pioneering work on every genre that was either popular or as a groundbreaking innovator are also the stuff of legend.

I wanted to take a look at how the Kings creations, especially from the Bronze Age over at DC, grew in stature and importance to the overall DC Universe. 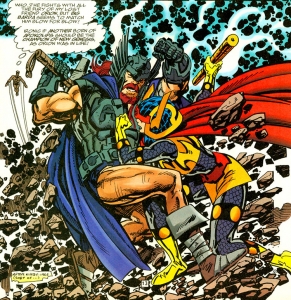 I believe one man is responsible for the growth in awareness and in building upon the legacy that is Jack Kirby. And that man is John Byrne. John Byrne loved Jack Kirby’s work and really seemed to have an understanding of where Kirby may have wanted these characters to go. I did a read through of the 20 issue treatment of The New Gods that Byrne did in 1997.It was called “Jack Kirby’s Fourth World”. Heretofore known as JKFW.

Byrne paid homage to Kirby in this series and was really able to grasp the scope and scale of the Fourth World Saga.He masterfully wove the many characters that Kirby created throughout his Fourth world, from Darkseid to Desaad, Granny Goodness and all the rest and put them together in an entertaining and enjoyable series. I am not going to reveal any spoilers in the 2 year storyline but if you haven’t read this series, may I recommend it as a pick up as we head into the Con season. Many of the vendors will sell VF/NM sets for a very reasonable price. 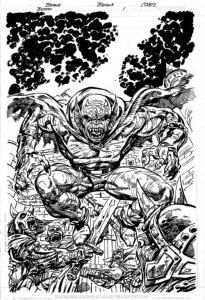 In 1991 John Byrne did a 4 issue Prestige format of Omac which was suggested for mature readers. A truly superb story and some of Byrne’s most impressive visual storytelling inked in a very unique look.This is by far my favorite treatment of Omac. Another gem you will be sure to pick up reasonably at a convention near you.

In 2005 Byrne did a seventeen issue run on Blood of the Demon. Another great treatment of a Kirby character that would reach out to a whole new audience.The storyline again brings in a great cast of unique Kirby characters with some truly exceptional storytelling by Byrne. Once again another run that is worth picking up at a Con near you.

And who can forget his epic run on the Fantastic Four? Bringing this up now is a little off topic but how can you not mention this run every chance you get! 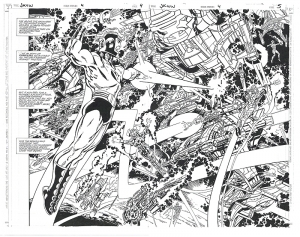 I think John Byrne deserves a tip of the hat for not only keeping these characters of Kirby’s in the forefront of the comic buying marketplace, but that he also added an air of modernity to many of the Kirby stories that may not have been as well received by an audience that did not grow up with Kirby. I say this not to take anything away from Kirby’s DC work at all, just that the market place had changed and many younger readers may have had a hard time relating to the unique quirkiness of Kirby’s writing where with the gravitas of the Byrne name on these characters, helped open up the Fourth World to a whole new generation of readers.

The place in which Kirby’s short time was spent at DC has grown to be a major part of the overall DC Universe in comics and on the movie screen.

Thanks to both Jack Kirby and John Byrne for a universe of incredible characters.