Well it’s been a while. Life got in the way for about 6 months ,and hopefully I will have something to say again about this great hobby of ours that will add to the conversation. 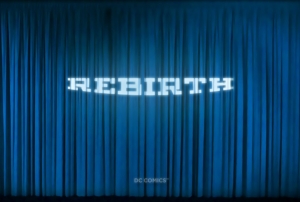 I have found over this period of time that for the most part I have not been buying many Marvel or DC comics at all. When I stand in front of the new wall of current comics, where every two years there is a reboot that wipes out everything that has gone before.

More Number Ones than you can shake a stick at. Ten different Avengers books, Ten X-Men books, half a dozen Spidey books, ten Star Wars… you get the point.

Now we have two Spider Men, Two Thors ..ugh! Crossovers with multiple comics that seem to have no other purpose but to mine as much money out of the seemingly shrinking number of actual comic buying fans. Coming soon …two Captain Americas!

I entitled this post Old Dogs and New Comics. Guess who the old dog is? And you know what? I’m ok with that. I am a believer in re-reading a good book or re-watching a good movie over watching or reading sub par new material.

Now don’t get me wrong: I’m not just a curmudgeon pining for the good old days. And believe me when I tell you I am fully aware of the nostalgia factor of this hobby. My question is, what are the new comic readers going to have to remember fondly when they are old dogs? The stuff I am loving that is new is usually not Marvel or DC at all. I love what Image is doing. My pull list is all Image and an occasional IDW book. Lazarus, Black Science, Fade Out , Velvet and so on. Very clever books indeed and each has its own look and long lasting creative teams.

One thing other than the constant reboots and number ones that is so annoying is the merry-go-round of artists that all look the same anyway. Great pictures but poor story telling. 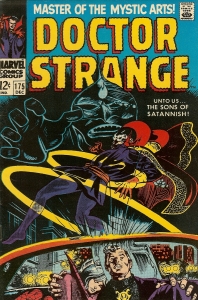 One of my favorite characters from Marvel’s Silver Age is Doctor Strange. Lee and Ditko truly created a unique character and I really came on board with Roy Thomas and Gene Colan with Doc Strange # 175. “Unto us …The Sons of Satanish”! I was blown away. This was my first exposure to Gene Colan and Tom Palmer and it was mesmerizing! Go back and have a look at issue # 175 and 176; masterful storytelling all around. When that series was cancelled at issue #183, I couldn’t believe it. It was years before the good Doctor got his own series again (solo) and under Steve Englehart and Frank Brunner and then Gene Colan’s return, the good Doctor had a long and at times great story arcs and creative teams. Remember Marshall Rogers run?

I was excited when Doctor Strange once again launched a new series and I picked up # 1 and 2 by Aaron and Bachalo. The first impression was that the artwork was technically very good and very creative, with a unique take on the world of Dr. Strange, but when I read the 2 issues back to back I had already decided that the treatment of the character was not what I was looking for in a Strange tale (no pun intended). 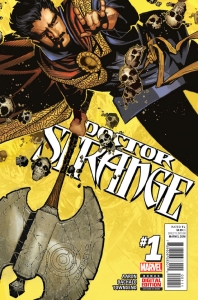 The character to me was almost an insult to what had gone before. Doctor Strange had the personality of a juvenile Tony Stark. A wise cracking ,ego centric knob. The Sorcerer Supreme was a serious character. His relationships were adult and serious in nature.

This to me is not Doctor Strange. And I really wanted to like this book!

Oh well, I think I will go back and ogle the steller Roy Thomas and Gene Colan run from the halcyon days of the Silver Age and will eagerly look forward to getting the latest issue of Velvet from this weeks pull list.

That book is a winner!

Till next time… continued happy collecting!