After writing the last column which featured the great Daredevil # 45 cover that had Gene Colan inked by Jim Steranko, a couple of other comics came to mind with interesting artist/inker combos. These were unique and rare combinations and ones I thought were worthy of sharing with you. 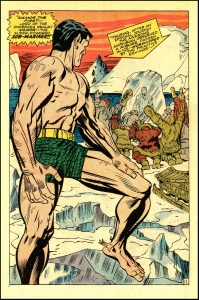 The first one is Captain America # 112. This was smack dab in the Jim Steranko run on Cap. If you can call 3 issues out of 4 a run, that is. Now as history tells the story (Jack Kirby Collector #5) it became very obvious that Steranko was in no way going to finish his 3rd issue on the title in time.This is on a Friday and the book needs to go to print on the Monday. So Stan calls the real Silver Age Super Hero, Jack Kirby, and asks if he can do it over the weekend! Jack says yes and basically crafts a story based on fishing Cap’s mask out of the river which was where Steranko left Cap at the end of #111, and does a retrospective of Cap’s career and does a masterful job as only the King can!

The interesting choice of inker on this issue is George Tuska. He was certainly a long time pro in the business, and who had become well known as the artist on Iron Man. If Jack drew it over the weekend then George must have inked it over the weekend! I urge you to go back and look at this book. Does it in any way look rushed to you? It is a great blend of Kirby and Tuska that is one of my favorite Cap books! Non stop Kirby action from start to finish! 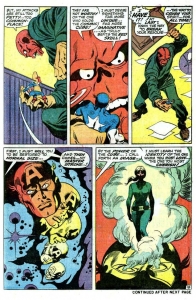 The next was right after Steranko’s last issue (#113) and it was drawn by John Romita Sr. Now Cap was created by Joe Simon and Jack Kirby in the 1940s, and when Jack left the title he was replaced by a very young John Romita Sr. Shortly after Romita took over the book it was cancelled, and the insecure Romita largely felt responsible for its cancellation. There is a difference in styles that are apparent immediately but both are excellent storytellers, and Romita certainly learned well from Jack how to pace a story and make the action dynamic. He also excelled at making Sharon Carter look vivacious! Now this issue was inked by Sal Buscema. Big John’s younger brother had just broke into the business by inking John on the landmark Silver Surfer title; this is the same month Silver Surfer #6 came out. So he had just come onto the scene and was making his mark on Silver Surfer #4-6 and in a few months would take over the Avengers. 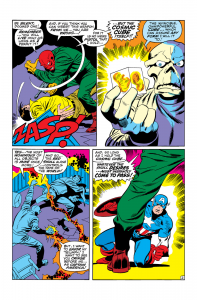 The third is Cap’s next issue, #115, which features my favorite Cap story of all time art wise. Big John Buscema and his brother Sal create another masterpiece featuring the Red Skull, in a cosmic cube story (has a much better ring than “the Tesserac” don’t you think) that has the Skull change bodies with Cap for the story that would be completed by Gene Colan moving forward in the storyline. Take a look at the last page with the Skull now with Sharon Carter in his arms! What a great team the Brothers Buscema were at this time in their careers!

Fabulous storytelling and artwork and all under less than stellar circumstances. Rushed ? Yes to all three but once again these are issues everyone needs to revisit.

Are they Keys? No not at all. But boy are they worth their weight in Gold to this ‘Son of the Silver Age”!