I  was always fond of the body of work done by Tony DeZuniga. I was mostly familiar with him as a result of the Marvel Magazine line in the ’80s. Particularly his inks over John Buscema’s pencils in Savage Sword of Conan. 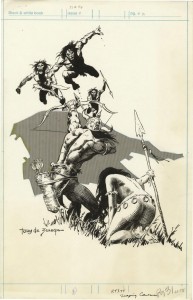 Tony was one of the many Filipino artists that in that decade came to the fore, again mostly in Marvels black and white magazines. Alfredo Alcala, Nestor Redondo and Alex Nino come to mind. Tony was instrumental in leading the way for these other artist and certainly counted these men as friends as well as being inspired by them.

I always found Tony’s style interesting. He didn’t have quite as heavy a hand when inking over others as perhaps Alcala and Redondo, and I don’t mean that in a disparaging way. Whoever he was inking still shone through his inks and the penciler was quite easily identifiable.

I have recently been looking through some of my Savage Sword of Conan(SSOC) collection, and I have primarily focused on the issues that were inked by him, Alcala and Buscema. My favorite being Buscema first, DeZuniga second followed closely by Alcala. Where Alcala really did have a heavy hand and ofttimes had such a heavy line that Buscema was only visible some of the time. Primarily in the storytelling rather than the figure drawing.

Tony would convey Buscema’s dynamism better and also his anatomy with a fine line that allowed for the movement in Big Johns figures.. He also still let the beauty of Buscema female characters shine through, and Big John drew beautiful women to say the least. When you think about it , he inked some of the most dynamic storylines in SSOC. A Witch Shall Be Born from SSOC 5, Conan the Conqueror in SSOC 10. The Epic full length adaptation of “Conan the Buccaneer” by Decamp and Carter in Issues 40-43. A fantastic story with superlative artwork! 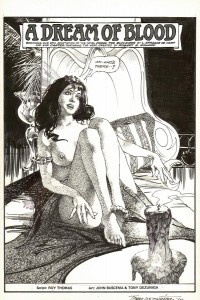 Marvel Premiere 16 was a tour de force over Gene Colan’s pencils on a character called Hodiah Twist, which was an interesting take on a Sherlock Holmes type character.

These are just a few of my favorite examples but I would love to hear yours. Tony was also co creator of Jonah Hex and the Orchid for DC . He did the origin of the Punisher in Marvel Preview 2 as well as a year later he returned to the Punisher in Marvel Super Special 1.
Tony had a long run as well over Buscema on the monthly Thor comic as well. In later years Tony began work as a video game designer, painter and teacher.

In early 2012 Tony suffered a stroke and soon after passed away from complications which arose.

I have one piece of his Original Art in my personal collection, a revisioning of the opening Splash page to SSOC # 40, “A Dream of Blood”. He really did have a beautiful line .

I hope you take a look at some of these issues if you have never seen them and if you have, I hope you see them with fresh eyes as I have recently. Beautiful work!

# A Dream Of Blood# Conan# punisher