When I initially was planning to do this post, I was going to talk about one of the most revered winning collaborations out there, John Byrne and Terry Austin’s run on the X-men. Which culminated with the Dark Phoenix Saga. However when I began my research on this post I became so aware of the great contributions of Dave Cochrum along with Len Wein and Chris Claremont, I had to move that post until next time.

Dave Cochrum along with Len Wein created the Uncanny X-Men! Giant Sized X-Men #1 is a usual suspect on most collector’s lists for the last 42 years.

Dave Cochrum is responsible for creating or co-creating so many characters, he deserves the recognition I am going to try to give him today. 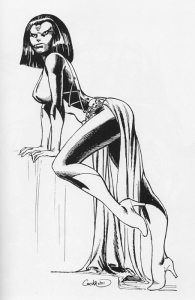 Dave created Storm, Nightcrawler, Colossus and Thunderbird along with Wein. Mystique, The Starjammers, the Shi’ar and the Brood with Claremont, as well as Ms. Marvel’s costume that she still wears to this day.

Dave also revamped the whole Legion of Super Heroes line up and look for DC prior to creating the X-Men. Nightcrawler was in fact a character Dave designed with the intent of using him in Legion but the powers that be thought the character too “strange in appearance”.

One of the most important changes Dave was a part of was the birth of Phoenix. Which even though he was not there for the end of the Phoenix Saga, he certainly started it.

When the X-Men took off and became monthly, Dave left the book in the very capable hands of John Byrne and Terry Austin in which the book reached even greater heights. 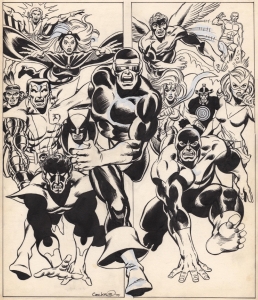 Dave did return after their run for a second stint with his beloved X-Men creating the very memorable storyline featuring Magneto as a holocaust survivor as well as the Brood. Which always reminded me of the Alien Xenomorph.

One of Dave’s favorite creations were the Futurians, which was finally pulled together in one graphic novel and Neal Adams is predicting it will be made into a major motion picture.

To close with a couple of interesting antecdotes, Dave did not design Wolverine but he certainly was the first artist to draw him unmasked and gave Logan those famous sideburns and funky hairstyle.

I have attached a picture that Dave had hanging over his desk that Chris Claremont fell in love with. It was a character sketch that Chris would later name Mystique.

So I may have got off track on my original post but Dave Cochrum deserves the credit for his many achievements. He unfortunately passed away in 2006 but he certainly left an incredibly rich legacy!