Despite it being a hugely popular genre in fiction, comics have traditionally been a bit lean on fantasy stories. Webcomics are changing that. There is a wealth of fantasy material being produced, from dungeon crawls, to fairy tales. Little Guardians by Ed Cho and Lee Cherolis is looking like it’s going to be one of those great quest high fantasy stories. 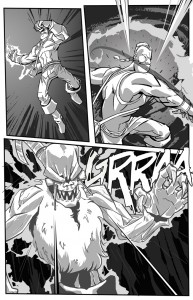 The story begins with a prologue wherein we are introduced to  Tane, the current guardian of yowza Village. A combination warrior and mystic, we see him battle a demon at the same time his wife is delivering his child and future village guardian. At the same time, a merchants child is also being born. Tane’s wife dies in childbirth and the child is a girl. Two disasters. so in true fairy tale style, the children are switched by the doctor and we now have the basis for our story. 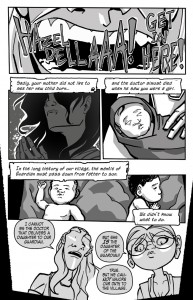 Chapter 1 picks up years later, the girl Subira is pure Cinderella, taking out the trash and minding the item store while her family attend the village zucchini  festival. But she is the true child of the guardian and strange things begin to happen. 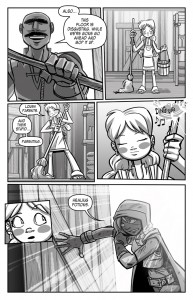 Idem on the other hand is being trained in combat and magic by Tane. He’s not exactly a quick study and seems more excited to attend the festival. If you’ve read any fantasy, you can already see where the story is heading. 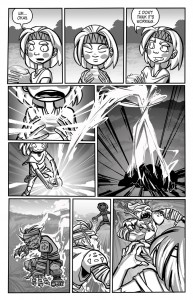 It’s a story in good hands. The prologue is compelling, the characters unique and fun. The humour is offbeat, often making modern gags, despite the fantasy setting. My only challenge at times was jumps between scenes, it could take a moment to realise the story had jumped to another location.

The art is really nice, a monochrome grey but with enough shading and detail to give substance to fairly cartoony characters. Cherolis has some great expressive stuff, and each character is unique and easily recognizable.

The story is just getting going, so it’s a good time to start reading before it gets as involved as I expect it’s going to. Check in Mondays and Wednesdays for new pages and Fridays for Thistlewhite’s Journal, a guide to flora and fauna of the region. 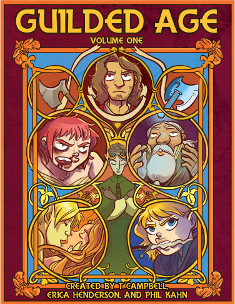 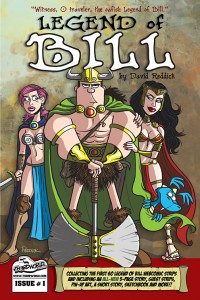 For something a little more D&D oriented, try Guilded Age. And for the lighter side, with both beef and cheese cake, check out Legend of Bill.