If you have to be stranded on Mars, it could definitely be improved by having a good friend with you. Sadly Captain John is Marooned on Mars with Asimov the Robot. Asimov would rather be alone. Asimov’s mission was to attempt a space mission run by an AI and hampered by a human. It’s not going so well.

Tom Dell’Aringa’s Marooned is a buddy comedy without the buddies. Snark and sarcasm abound, not just between John and Asimov, but from the Martian residents who they soon encounter. The format is initially a gag strip that follows from one day to the next, but over time the story builds and Tom moves to longer and longer updates and the story gets richer and deeper. An example is Episode 7, (Tom breaks the narrative up into episodes focusing on story arcs and actually offers a neat way of reading each arc.) which details the disaster that put Mars into its current state and serves as an environmental allegory, a growth from its early gag format. 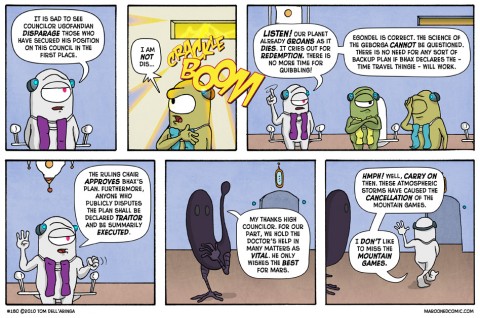 The art is clean and simple, and has shown some refinement over time. Dell’Aringa does some nice things with colour, the characters pop from the backgrounds and his characters and playful and expressive. He also keeps the special effects to a minimum, a danger in the days where it’s so easy to go overboard with Photoshop, especially when doing a science fiction comic. 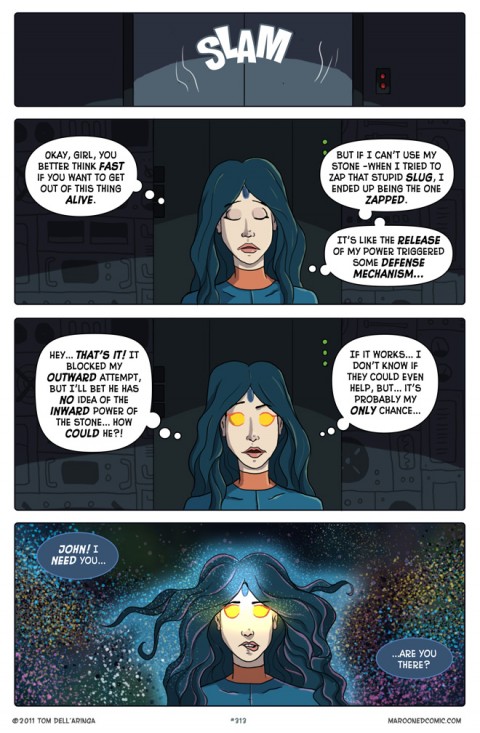 While the original tension might have been focused on escaping from Mars, let’s hope they don’t succeed to quickly as there’s lots of fun adventures to be had Marooned on Mars.

If you’re looking for more Sci-fi fun, be sure to check out both Jonathan Rosenberg’s earlier Goats series for a surreal wandering story or his new gag strip Scenes from A Multiverse.