I hope you enjoy this series and it gives you some perspective on what it takes to get into the industry.

I sat down with Cary Nord at a small coffee shop just down the street from the Raid studio, where Cary has been a member for over a year.

We grabbed our coffees, tried to warm up and joked around a bit, but when I started asking him questions about his career, he got right down to business. 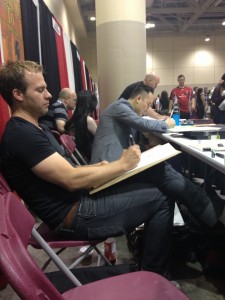 Cary is currently an artist for Valiant Entertainment and has most recently worked on XO Manowar. He is best known for his long run as the artist for Conan. Some of my favourite art from him is from this series and I learned that it was also his proudest project. “It had the strongest vision and execution of that vision,” he told me. Cary even won an Eisner in 2004 for Best Single Issue or One-Shot for Conan: The Legend #0.

Work history is amazing, but why I really had him there was to find out how he got into comics in the first place. Well, Cary always had an inclination to draw; at the age of 13 he bought his first comic book. At the age of 14 he realized that you could actually create comics as a job. It was the first time in his life that he thought of having a career, and as he got older the idea of working in comics just kind of stuck. He started by copying, line for line, the pages of his comic books, and he thinks he learned a lot this way, but he didn’t get too serious about building an actual portfolio until he was in grade 11 and 12. “From there I was just a sponge with anything that had to do with comics, especially about drawing comics or getting into the business. I picked up every piece of literature on it I could find. And, it was before the internet, so it was a chore to do that,” Cary said.

Cary is from Calgary and when he was younger they didn’t have any conventions in his area, and he didn’t have the opportunity to talk to editors. So, he put his portfolio together and sent it off to companies in the mail. During this process Cary knew others who were sending portfolios in the mail too, and they were all receiving rejection letters. “They were all getting broken hearts and I couldn’t wait to get my first rejection letter.” He explained that he was excited because it would be his first very official response and material from these big companies he was applying to. There weren’t many ways to talk to publishers back then, so it was exciting to hear anything from them. “There weren’t forums and online communities like there are now. You either went to convention places like New York, or you got a letter, and that is what I got, I got a letter and it was awesome.”

After high school, Cary applied to the Alberta college of art and design. He began foundation year but quickly dropped out because of their intolerance for the comic book themed projects he insisted on doing. “I realized that I’d have to take the program again if I wanted to get to their commercial arts program where I could actually learn something useful, so I took foundation program over again and passed with flying colors,” Cary stated proudly. While in school, at the age of 19, Cary got his first gig with DC on a book called Showcase, where he drew The Kobra Chronicles.

I asked Cary if he wasn’t in comics, what he thinks he would be up to. He smiled and said cheekily, “After dropping out of school, I was one interview away from being a post office employee.”

When I asked Cary if there was ever a point in his career that he didn’t want to work in comics he referred to this first job. “I was a bit of a slacker in high school, I didn’t really have to work that hard because I had talent, and it got me through. This was the first time I really had to try,” he said. He told me that his editors made him re-do the entire story about three times, “..and that was just to get it up to snuff so it was passable. I couldn’t handle getting rejected that much.” He went on to say that these edits came when he was in school and he also had that workload to deal with. After he finished his first year of school he was getting steady jobs in comics and decided never to go back.

After looking back I wanted to know what lay ahead for Cary, “I want to work on creator owned material and dabble back and forth from mainstream superheroes and my own work,” he said. He eventually wants to get to a point where he can work on what he wants, instead of what he has to, “pure projects.”

Bonus Question Time: I asked “What are some jobs you had before getting into comics?”

Cary answered, in a true Alberta fashion, “I was a Ranch Hand, where I fixed fences, painted and weeded thousands of miles of ditch.” He also worked at a hand car wash and Wendy’s, “working in fast food was awesome.”

Next in the series: Ramon Perez