If you could have any super power, what would it be?

This question is asked of a comic fans all the time. Even when a non-comic lover finds out I am a comic fan, they ask this question. For years I wasn’t sure how to answer. There are so many powers out there to choose from, so many universes and so many super heroes/villains. Do you choose a simple power, like flying or invisibility, or something more “I would never die!” like Wolverines regeneration powers.

While thinking about this ultimate question I realized something, the answer is not that easy. Some people are very quick to respond, they have thought about this before, or they simply choose their favorite hero. While others are unsure, or their answer depends on what they are reading at the time. Some people decide what powers they wanted when they were younger and stick to it, never changing their minds. My answer tends to change over time, I have recently settled on one, but I’ll get back to that later.

I think the answer to this question shows a person’s personality. If you really think about it, what power you would be saddled with forever, if you could only choose one. This could be something that defines who you are. Yes, I am aware that this isn’t real life and it’s not that serious of a question, but to a true comic lover it is. It can be very controversial if brought up around a group of comic fans. What some may think is a simple answer, like Superman’s strength, is examined, picked apart and questioned. Even the question itself isn’t that simple, are we talking about one super power, or the powers of one super hero? 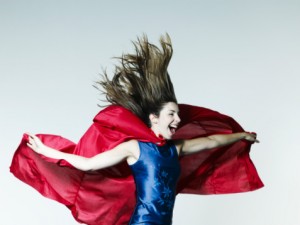 This ultimate fan question popped into my head the other day while at the Big B Hamilton’s Anniversary sale, while two men dressed up as Superman and the Flash had a race down the street. As children cheered dressed as their favorite comic characters I thought to myself, if I had to pick between the two, who’s powers would I choose?

Now, my answer to this ultimate comic question, what super-powers would I choose: I would want the powers of the Flash.

After many years of thinking about this, I choose the Flash because; he ages slower than everyone else because he approaches the speed of light, and what girl doesn’t want to look young as long as possible. He has the ability to vibrate though solid material, this means he could technically vibrate into a person and if he stopped could rip them apart at a molecular level and he can travel through time. But, even with all these bad ass powers, he is not immortal. The idea of living forever seems somewhat depressing to me, or I would probably choose Wolverine’s regeneration powers.

I would love to know what you would choose as a power and why. Let me know in the comment section below.