Ok, look I admit it, I am terrified of zombies. I have and always have had an irrational fear of the fictional characters. I have had many people try and convince me other wise, they suggestions things like the Zombie Survival handbook, or that I should watch movies like Shaun of the Dead (which I watched…it scared me).  But, no matter what, I can’t help but be afraid of the things.
So, why am I confessing my weird and irrational fears to you, my readers? Because I feel like my fear of zombies is preventing me from enjoying a whole genre of comic books.

It seems that zombies are becoming more and more popular. With the explosion of Walking Dead (both the comic and the television show), zombies have become the focus of movies, TV shows, and even comic books. The undead are the easy go-to for sales, the cult culture that was obsessed with them have grown to the everyday consumer… except for me, and I feel left out.

For example, there is a whole series of comic books where they take characters like Captain America, She-Hulk and Wolverine and make them Zombies, called Marvel Zombies, and it doesn’t stop there.  There are some zombie comics that I am very interested in reading, but am too nervous to crack open, like The Goon. Seeing as I have never read it I feel my explanation won’t do it justice, so like any teen trying to write a school paper, I will steal my explanation from Wikipedia. “The Goon is a comic book series written and drawn by Eric Powell. The series mixes both a comical and violent atmosphere with a paranormal slant, with the average story concerning various undead creatures/zombies, ghosts, ghouls, mutants, skunk-apes with an unnatural hunger for pies, giant squids, mob/gang leaders, extra-dimensional aliens, mad scientists, robots, and more.” – Wikipedia. Doesn’t that sounds awesome? But why did it have to be zombies! Other paranormal characters don’t bother me, so why can’t they just cut out the zombies. 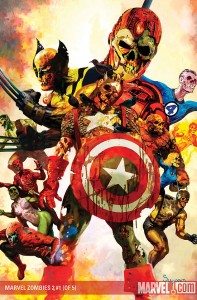 Next on my “I want to read, but am scared to” list is, Victorian Undead…Sherlock Holmes vs. Zombies by DC Comics. Come on! I love Sherlock Holmes and it sounds awesome. Some more zombie themed comics include; Fanboys vs Zombies, and iZombie. 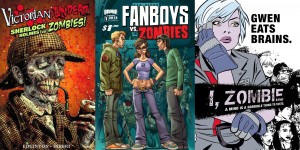 Seeing as I am not “in the know” when it comes to zombie culture, I hope that this is simply a passing fad. Although their popularity continues to grow, I can only dream that the undead soon fizzle and die (and never rise again) into the 99 cent long boxes. If you are a zombie fan, either an expert or  are new to it, I would love to hear what you have to say about the quickly growing trend.

Overall, I am sad to say it will be extremely hard for me to ever pick up anything zombie themed as my irrational fear is much stronger than my love of comics. I can just hope that fish don’t start becoming popular in comics. ( I am also irrationally afraid of fish, don’t judge me…I can feel you judging me.)