This week Toronto is celebrating Gay Pride and in the spirit of this celebration I have decided to talk about some LGBTQ comics and comic characters. 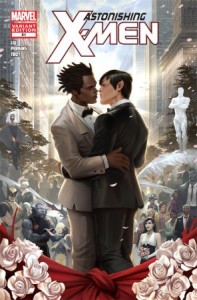 Recently the popular comic, Saga, had some drama around same sex explicit images in issue #12. The issue had two small images showing explicit oral sex between men. The issue was not available through ComiXology which meant any iOS platform readers were not able to purchase the comic. Many thought that the issue was banned because the images were simply too risky, but if you are an avid reader of Saga you know that previous issues have had very sexual images that were not banned, but it seemed these specific gay images were. 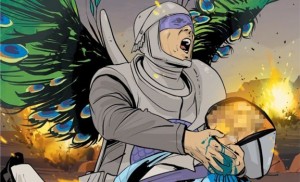 Now, I am here to discuss same-sex themed comics and characters, so why bring up this recent negativity towards a comic with gay images. Well, many people got up-in-arms regarding this ban on Saga, but I ask you, if there are so many supporters for gay rights in comics why aren’t we supporting more gay themed comics. Sure there has definitely been progress. Like major titles having gay characters, Archie’s Kevin Keller for example. The sales of same-sex themed comics are nowhere near any major comic titles. I believe this is why gay themed webcomics have become so popular.

While researching for this article, I found it hard to find LGBTQ comics right away, but easy to find LGBTQ webcomics. Simply google “gay comics” and a large list of webcomics will be there waiting for you to explore. LGBTQ comics may be hard to find, especially when compared to mainstream comics, but luckily gay characters are fairly common in large title comic books.

One of my favourite series contains a gay character, Y the Last Man’s Doctor Allison Man. She may be traveling around a post apocalyptic world with the last man on earth, but she has no interest in him at all.

DC Comics Stormwatch’s two main Characters Apollo and Midnighter, are gay as well. I have never read it, this mention was given to me by Ed Campbell. Brian K Vaughan also wrote an issue of Midnighter (issue #7) for Vertigo…I think I see a trend here.

Batwoman is another main stream iconic gay character. Kate Kane’s skin tight outfit and flaming red hair could turn a lot of us ladies to the other side 😉

My favorite gay comic character has to be Wallace Wells from Scott Pilgrim, he is sarcastic and amazing! and I love how they describe him as “Pretty Darn Gay.” 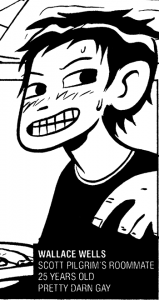 Northstar or Jean-Paul Beaubier, he was one of the first characters that came out as gay in American Comics, especially in such mainstream Marvel comics such as X-Men.

After researching this article I have come to the conclusion that I am disappointed in myself for not knowing more LGBTQ comics. If you know of any great same-sex themed comics please share, help expand my knowledge on the topic. I would also love to hear who your favorite gay character is!