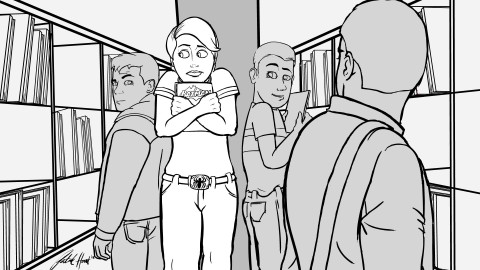 I was recently in London, Ontario and while I was there I had some time to kill, so I went to a couple of comic book stores. By the time I got to the third store I noticed something: men kept staring at me. Living in Toronto I don’t experience this often. There are many girls who go to my local comic book store. But, when I was in London, I was approached by a store employee who proceeded to have a very awkward and condescending conversation with me. “What you got there?” … “Is that your favourite superhero?”… “You don’t seem like much of a nerd.”  Needless to say, I was a bit insulted, uncomfortable and I excused myself and walked away.

I am not sharing this information because I’m full of myself. I am sharing this information because I want to address an issue that happens in the majority of comic book stores. Women getting put in awkward situations by guys who don’t know what to do when they find a girl in a comic store.  I must admit some stores are better than others, but if you are a nerdy girl you have had this experience at least once.

Shows like The Big Bang Theory aren’t helping. They show the typical nerd type guys being shocked and scared of a cute girl in a comic store; it doesn’t help that the cute girl is a ditz who knows nothing about comic books.

Some of you guys might be good at treating girls as equals, some of you might only think you are good at it, and others are well aware that they do not know what to do when they find a girl in that type of environment. Below are a couple of tips on what to do when you find yourself standing beside a girl in a comic/gaming store.

Assume we know just as much or more than you do.
This may or may not be the case; but do not assume we know less or you will come off as condescending and rude. Even if you have never seen this person in your local store before, that doesn’t mean they are not into comics. Instead try and talk to her about what she looking at, or a comic she is holding in her hand. If it’s something you don’t read, mention a similar comic that you do like. I’m sure this will spark up a conversation, and it will be about something you both enjoy…comics

We can see you staring.
You are not that sneaky. We see you doing it. If you make accidental eye contact, just smile and say hello. Don’t make it more awkward than it needs to be.

We don’t have to look a certain way to be into comics.
Just like men, us women comic nerds come in all shapes and sizes. No matter if we are walking around in our Green Lantern t-shirts, or a dress and heels we are into comics. Why else would we be in a comic store! Well…some girlfriends do get pulled into comic stores, but they might be future comic lovers, so don’t scare them off!

Overall, treat us like you would treat any nerd and don’t assume anything about us, but the fact that we love comics too!

I would love to hear some stories about awkward moments you have experienced; either ones you caused or have witnessed in a comic store, gaming store or convention.

Thank you to Patrick Hart for the image at the top the of article.